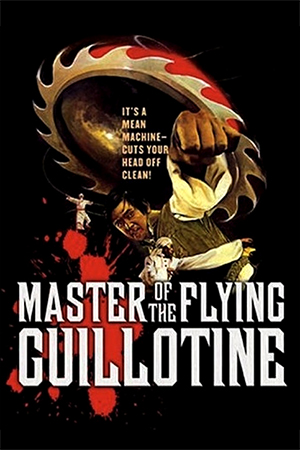 The reputation of this kung-fu extravaganza has reached vast proportions throughout its years on the movie scene. Now, thanks to Pathfinder DVD, ‘Master Of Flying Guillotine’ has been painstakingly restored and given the kind of treatment that will be music to the ears of many fans. More information on the DVD and its various attributes later, but first the film itself.

The One Armed Boxer is known throughout China thanks to his expertise and the defeats of an assortment of foes in a previous episode. The master of two of these hears of the deaths of his pupils and vows to avenge them. The master, though, is no ordinary fighter – he is a notorious Ching agent and the exponent of the fearsome ‘Flying Guillotine’. Although blind, the mysterious killer is feared everywhere and decides to track down the One Armed Boxer.

Meanwhile, the Eagle Claw clan has organised a martial arts tournament that attracts the attention of a wild assortment of warriors from all over Asia. Word reaches the One Armed Boxer who decides to watch the competition with his students and observe the various styles on offer. Unfortunately, the master of the Flying Guillotine also travels to the arena after receiving information about his foe and a possible anti-Ching meeting. As the competition progresses, the battle lines are drawn behind the scenes and the Ching agent calls on a trio of the foreign fighters to achieve his two-fold goals; one is an arrogant Thai Boxer, the other an Indian mystic with extending arms and the final one a Japanese fighter known as ‘Win Without a Knife’. This collection of characters are thrown together in the final confrontation as the two powerhouses – alongside their respective cohorts – square up in a series of showdowns.

As with his previous hit ‘One Armed Boxer’, Wang Yu again fills the storyline with exotic characters and highly original episodes. This time though, Wang Yu hit his creative peak with a series of memorable images that have remained ingrained in the minds of many genre fans. The choreography is also a step above many of the other films of the time as Hong Kong supremo Liu Chia-Liang crafts realism with surrealism to fine effect. There’s much to recommend ‘Master Of The Flying Guillotine’; it’s hard not to be drawn into director Wang Yu’s eccentric world with its almost Python-esque techniques and fights. As director he creates an air of tension during the build-up to the inevitable conflict and a discernible sense of dread every time the master of the Flying Guillotine appears.

However, ‘Master Of The Flying Guillotine’ is not without its obvious problems. Importantly, its impossible not to find moments of the film unintentionally hilarious; even taking into account the technical restrictions, there’s too many farcical moments to take things too seriously. As a result, the hard work that is taken during the early stages to etch out an atmosphere are undone. The anti-Ching plot thread is also wasted – starting off as an interesting sub-plot, it is soon thrown away. Director Wang Yu bathes some of the action in unnecessary violence that I don’t enjoy putting up with, but it is thankfully infrequent. ‘Master Of The Flying Guillotine’ is required viewing due to the aura that surrounds it and some of its definite strengths. For me it isn’t the all-time classic that it’s made to be though.