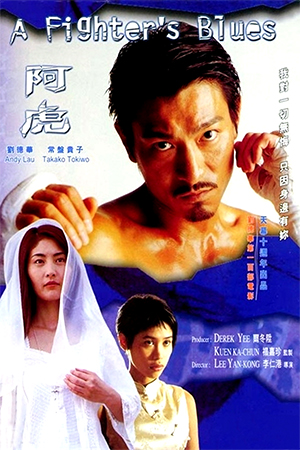 In 1987, Fu Mong (Lau) is a champion Muay Thai kickboxer madly in love with Pim, a reporter who is writing a book on his rise to glory.  Thirteen years later Mong is released from prison for an as yet undisclosed sentence and goes in search of Pim to rekindle their relationship.  Sadly she is no longer alive but has left him a daughter, Ploy, who was born shortly after they separated.  Ploy is currently being looked after by Sister Mioko in St. Mary’s orphanage so Mong decides to contact her in the hope of bringing some stability to both their lives.  No sooner have things begun to settle down than current boxing champion Tawon appears on the scene to challenge Mong to a duel.  It’s time for Mong to stop running from his past and win this final fight for the sake of his family and his own self respect.

At first glance, you may be forgiven for expecting ‘A Fighter’s Blues’ to be a boxing film. However, what it really offers up is primarily a drama with only a few flashes of fighting. Unfortunately, it’s not the good kind of drama either, as the story is so lightweight and lacking in real emotion that you never really feel fully involved. The characters are a big part of the problem, as they come across as vague cardboard cut-outs with no genuinely relatable or realistic traits. Added to this, it all culminates in a fairly obvious and cheesy conclusion, meaning you come away feeling fairly dissatisfied by the whole affair.

As for the acting, it’s equally disappointing. Andy Lau once again plays the ‘guy with a chequered past’ and it’s a performance that is starting to become tiresome. I’ve voiced my concerns before about his lack of quality films, and ‘A Fighter’s Blues’ is not the role to stretch his abilities. I like Lau and think he is a very capable actor but he just seems far too content to take any part that comes along. Tokiwa Takako is probably the only other significant player here and while she’s not exactly bad, she fails to leave a lasting impression. That being said, I’m not sure whether that’s really her fault or just the weak material.

The action, when it finally comes, is fairly muted and poorly shot.  Blows are presented in fast takes and interspersed with quick close-ups of grimacing facial expressions.  It’s not a particularly exciting way of handling the action and you often feel like the scenes are only there to help stretch out the running time.  This is particularly noticeable in the finale as it is built up as something of a ‘Rocky’ style face-off, but eventually fizzles out with a relatively foregone conclusion.

‘A Fighter’s Blues’ isn’t exactly a bad movie, but it is particularly mediocre one.  Perhaps if the story were more involving or it contained better action, it might have been more appealing. As it stands though, it’s really only going to serve as a quick fix for hardcore Andy Lau fans.