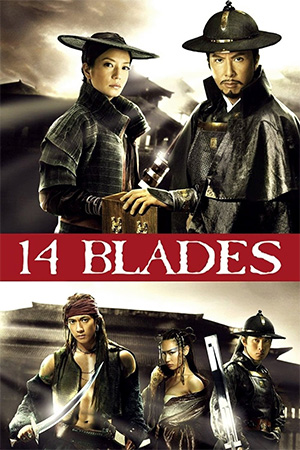 Daniel Lee directs Donnie Yen in this throwback to the 80’s swordplay genre. The film is an obvious tribute to the Shaw Brothers studio, but does it live up to those heady heights?

Qing-long (Yen) is the head of the Jinyiwei, the Emperor’s elite skilled fighters who are the masters of the 14 Blades. They answer only to the Emperor and keep peace and tranquillity within the Empire. The 14 Blades themselves all have a purpose; eight are used for torture, five for killing and the last for an honourable suicide if a member of the Jinyiwei can’t complete the mission.  In the course of the film, we get to see all these weapons in action.

The trouble comes in the guise of Jia (Law Kar-Ying) who plots with the exiled Prince Qing to overthrow the Emperor and take control of the Empire. Qing-long is sent to kill the Imperial councillor and retrieve the box which contains the list of traitors.  But Qing-long discovers he has been lied to and the box actually contains the Royal seal. Qing-long is left betrayed, on the run and searching once again for his dignity and honour.

Along the way, Qing-long also gets a love interest in the form of Qiao Hua (Zhao Wei), a member of a group that helps Qing-Long escape from the Jinyiwei.

Visually, ’14 Blades’ is stunning. Daniel Lee once again paints the screen with a multitude of variety, from Deserts to Forests to Cities, and the screen just oozes style and substance. But it’s really Yen we’re talking about here and we all of course want to know about the action.

In this regard, Lee doesn’t let us down as he gives Yen is a variety of fighting styles and a main villain in the form of Kate Tsui, a former Miss Hong Kong who is hardly recognisable in her medusa inspired get up. Honourable mention must also go to Wu Chun as Judge, who is obviously going for the Jack Sparrow look… no, really!

So, does ’14 Blades’ deliver? YES and then some! It has numerous nods to the Shaw Brothers classics and harks back to those swordplay flicks of yesteryear, making you smile, cry, jump for joy and shout like a banshee, like any good martial arts film should. And so, like a flashing blade of beauty gliding across the silver screen, I recommend you get yourself a slice of this awesome swordplay flick.