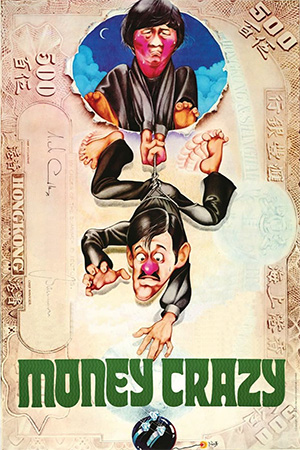 Despite the bewilderment expressed in my reviews for ‘Plain Jane To The Rescue’ and ‘From Riches To Rags’, I once again find myself taking a look at another of John Woo’s early curios. ‘Money Crazy’ is very similar in tone and style to Woo’s other pre-‘A Better Tomorrow’ comedies, but this time the usual star, Ricky Hui, is teamed with popular comedy actor Richard Ng.

Poison (Hui) is a keen gold-digger who will do anything for a quick buck, an aspect of his personality that creates obvious conflicts. After using some trickery to endear himself to local tycoon Rich Chen, Poison is hired as a bodyguard and asked to transport some valuable gems across Hong Kong. On the way to his destination, Poison is robbed by a young woman and Tough Guy (Ng), a man very similar to the bodyguard himself. The gems prove to be fake though and Poison and Tough Guy agree to help the woman rob Rich Chen when they hear that the real diamonds are actually her elderly father’s. In their bid to pull off the scam, both men are keen to help their new friends out while also pocketing some of the benefits themselves. However, slipping into Rich Chen’s fortress-like mansion is certainly not going to be easy.

John Woo’s comedies remain enigmatic to the modern viewer though ‘Money Crazy’ proves to be one of his most consistent efforts. Taking some obvious cues from the 70s hits of Michael Hui, ‘Money Crazy’ is an episodic musing on the money-hungry attitude of a few ordinary men. While Hui’s work tends to weave in a satirical edge, Woo concentrates on a more slapstick approach that, at times, loses its direction. Woo’s handling of the material lacks the exquisite touches that made Hui’s classics milestones in Hong Kong and his control over the proceedings – as seen in his other comedies – is found wanting. For these reasons, ‘Money Crazy’ is very much a poor man’s ‘Private Eyes’ or ‘Games Gamblers’ Play’.

Though it’s not in the same league as the Michael Hui hits it tries to emulate, ‘Money Crazy’ is still reasonably entertaining and certainly better than Woo’s other ventures into the genre. Naturally much of the film’s focus is on the sublime Ricky Hui, an actor who is never given due recognition for his exceptional comic timing. Hui’s crumpled face and nervy expressions convey more emotions than the histrionics of hundreds of lesser performers. Richard Ng is a superior foil for Ricky Hui and, as was seen with his later ‘Lucky Stars’ films, he brings a presence to the production that is all his own. With two such actors cast, ‘Money Crazy’ is a production that is not devoid of the odd moment of humour and presents a generally entertaining atmosphere throughout its running time.