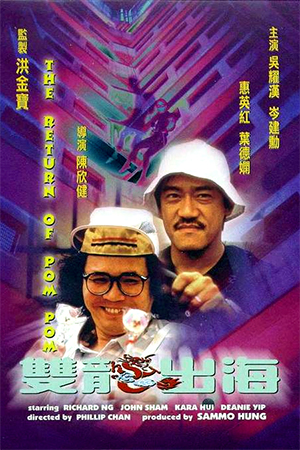 The impressive box-office takings of the action comedy ‘Pom Pom’ made sure that a sequel quickly followed. John Shum and Richard Ng are re-united as loyal detectives Curly and Beethoven with Deanie Ip returning as Ng’s love interest. This follow-up starts with the wedding of Beethoven and Anna that had been previously hinted at in the original film. From this point continues the typical mixture of extended comedy routines and short, sharp bursts of action. Here the two partners are sent out by their long-suffering chief to catch notorious thief ‘The Flying Spider’. This master criminal had long before been involved in a battle of wills with the law and now wants revenge for his turn in fortunes. His target is revealed to be the police chief who must therefore use his inept underlings to clear his name. As with all of their previous cases, Curly and Beethoven find themselves out of their depth and reliant on unconventional methods to get the job done. Matters are complicated when Curly falls in love with a young woman who, unknown to him, is in fact the daughter of ‘The Flying Spider’. Another twist brings to light the possibility that this seeming innocent may well be following in her father’s footsteps.

For those who know what to expect, ‘Return Of Pom Pom’ once again offers very light entertainment and value for money. As with all of the ‘Pom Pom’ films, the emphasis is on comedy and specifically the interplay between Shum and Ng. Continuing their winning combination from ‘Winners And Sinners’, the duo have a charming chemistry that makes the running time rush by. The comedy on offer here doesn’t pretend to be sophisticated, but at the same time it thankfully avoids the crass humour that other Hong Kong features have stumbled into. Perhaps the best way to describe ‘Return Of Pom Pom’s comedy is that it is innocent and unashamedly effective. When the minimal action does come it proves to be a nice extra to the amusement that has preceded it. Enjoyable and satisfying for those familiar with this particular sub-genre.