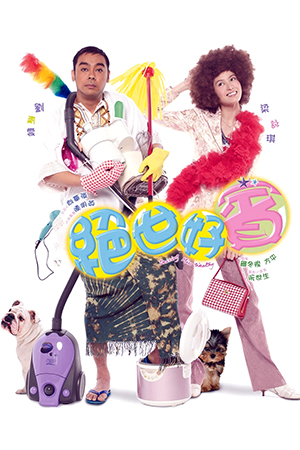 Another Lau Ching-Wan comedy and another impressive set of box-office figures. After financial success with ‘Good Times, Bed Times’, ‘Itchy Heart’ and the excellent ‘Fantasia’, Lau can rightly be considered one of Hong Kong’s biggest cinematic draws; even Derek Yee’s commendable drama ‘Lost In Time’ notched up Hk$15million while also reminding us all what a great actor Lau Ching-Wan is. Here, Lau is once again teamed with Gigi Leung, an actress who has gone up in my estimations ever since the joyous ‘Turn Left, Turn Right’. Despite the obvious talents of the cast and crew though, ‘Driving Miss Wealthy’ is the kind of stale romantic comedy that will dishearten all but the most forgiving.

Without a proper job and no prospects, ex-policeman Kit (Lau Ching-Wan) finds himself relying on scraps of work handed to him by his former superior (Hui Hiu-Hung). One such job is that of a bodyguard to ‘Trillionaire Lap’s spoilt daughter Jennifer (Leung) and, after passing the interview, Kit is hired for this lucrative opportunity. However, it is then that the twist is revealed: As Jennifer refuses to have a bodyguard around her, Kit must pretend to be her Filipino servant instead. Changing his name to Mario and adopting a mixture of fractured Cantonese and English, the newly-dubbed Mario is introduced to his charge and starts work. Jennifer’s sheer profligacy annoys Kit as does her blind faith in her conniving friends and associates though he remains tight-lipped about his feelings. However, Jennifer’s father sees his daughter’s lack of appreciation for her riches and, with the help of Kit, decides to teach her the value of money. Feigning an illness, Lap sets things up so that his assets are apparently stripped and his daughter is forced out of the family mansion. Now Jennifer must scrape a living with Mario and try to adapt to the extreme conditions she finds herself in.

The first fifteen minutes of ‘Driving Miss Wealthy’ show real promise; including a brief, but wonderful parody of the famous shopping centre shoot-out from ‘The Mission’, the hopes are naturally high that some real wit will be drawn from the unusual storyline. Sadly, things go progressively downhill and whatever invention or interest the comedy initially offered follows suit. Yet again the humour is so parochial that those who aren’t fluent in Cantonese are unlikely to derive much enjoyment from the film. This, alas, is the main difficulty of James Yuen’s film – it simply isn’t the kind of quality production that has the charm to compensate for its very localised comedy.

Lau Ching-Wan is the kind of flawless professional who can take even tepid material like this and give it a little bit of life. Swinging from his over-the-top and slightly camp Filipino impression to an obvious (and understandable) disinterest, Lau is at least watchable. Though I’d usually be critical of this very extreme way of acting, in ‘Driving Miss Wealthy’ it’s one of the few aspects that is enjoyable. There’s the usual jokes about Lau Ching-Wan’s dark skin which tend to baffle most of us, but seem to feed into the storyline of him being mistaken as a Filipino servant. Some of the Filipino stereotyping does appear to straddle the line of good taste – none of the jokes are particularly cruel or demeaning, but, as a non-Hong Kong resident, they did tend to stray into dangerous territory. Of course, this is something that each of its audience may or may not see during their own personal viewing.

Besides any thematic weaknesses, ‘Driving Miss Wealthy’ simply isn’t sharp enough or emotionally engaging enough to sustain the attention. While it begins quite well, the antics of Gigi Leung’s often obnoxious, often gratingly immature character just make the minutes drag by without mercy. The main message that comes from the film – despite the obvious moral of the story – is that the opulent members of Hong Kong’s upper-crust have very little taste. While Jennifer is wealthy in an extraordinary way, she lavishes money on a mixture of awful outfits and physically disturbing hair styles. As with ‘My Dream Girl’, the wealthy are portrayed to have all the class of a ‘Posh Noodle’ and the ordinary folk are shown to be untrustworthy, yet ultimately redeemable. Such characterisation gave me frightening flash-backs to the aforementioned horror show that was ‘My Dream Girl’.

Putting my rambling aside, ‘Driving Miss Wealthy’ is the kind of pallid production that has little to spark interest. The romance that blossoms can be seen a mile off, but director James Yuen makes no attempts to build any foundation to it; in one of those anaemic twists that blight scores of lesser romantic comedies worldwide, the affection that develops between the two is completely stagnant and unrealistic. After promising so much after the quirky ‘Clean My Name, Mr. Coroner’, Yuen has slipped into the comfortable routine of churning out financially winning hits while killing any artistic skill.