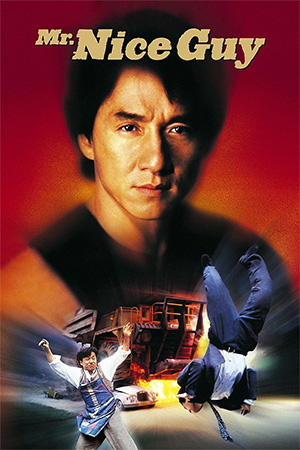 It’s a widely held belief that Jackie Chan will not match his previous efforts like ‘Police Story’, ‘Project A’ and ‘Miracles’ ever again. This may well be true, but the question needs to be asked, will anyone ever make films like this again? Perhaps, with the passing of the golden era of Hong Kong film-making, the chances of any repetition of these is very unlikely – especially from an ageing Jackie Chan. His 1994 masterpiece ‘Drunken Master 2’ gave clear evidence that he still had much to offer audiences and that many of the traits that make him unique still remain; to expect him to do what he did 15 years ago, however, is highly improbable. With ‘Mr. Nice Guy’, Jackie Chan reaffirmed his friendship with Sammo Hung and gave the cinematic legend a chance to direct a big-budget picture again. The finished product is a frustrating, yet strangely infectious spectacle.

Jackie Chan plays Jackie (!) – a celebrity chef who is stationed in Australia. When a female reporter is attacked by a band of burly thugs, Jackie is forced to step in and protect her by using his sublime abilities. After involving himself in the skirmish though, Jackie finds that he is targeted by the villains as well and has little idea as to the reasons for this. It gradually dawns on the innocent chef that he has accidentally come into possession of a videotape which exposes a local drug dealer. Needless to say that the various groups looking for the tape make themselves known to Jackie; firstly there’s the dangerous criminals seeking to destroy the evidence and then there’s the female reporter who originally shot the footage. All attempts by the reluctant hero to avoid the conflict are in vain as, during a series of incidents, he must take the law into his own hands and stand up against the determined killers.

This remains one of the most awkward Jackie Chan films to rate in recent years, so bitterly opposed are the positive and negative elements. The first impression of the film is just how weakly constructed the actual storyline is; there seems little in this department to hold anyone’s attention. Some attack Chan’s films as plotless, but there is no doubt that his best works are far ahead of ‘Mr. Nice Guy’ in these terms. Such a woeful piece of narrative gives far too much fuel to the aforementioned argument and detracts from the quality films that he is certainly responsible for. The acting is also fairly wooden throughout the whole cast with only a few exceptions – namely Chan who does his best with the material given. This severe fault affects the overall quality of the film and is the main reason for the loss of one star off the rating. It’s sad to report that Sammo Hung’s direction is partly to blame for this; there seems to be only the faintest sign that this was directed by the Hong Kong legend who crafted films like ‘Pedicab Driver’.

It’s vital to remember that, putting these quite jarring faults aside, this is still a very engaging film. The action is some of the best that Jackie Chan has performed in recent years and is a major highlight of ‘Mr. Nice Guy’. When the master of action is in full flow, fending off a number of assailants, there is little in world cinema to match it. Of particular note is the superb battle that takes place on a construction sight; this ranks as another golden Chan moment.

After this consideration, ‘Mr. Nice Guy’ is a film that is better than its reputation, but still could have been much better. The action and the winning persona of the lead are reasons to give this four stars, but the obvious deficiencies means it’s only a three.