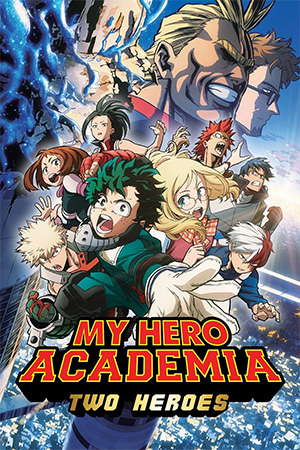 After the number one hero All Might is invited on a summer trip to “I-Island”, a man-made island where the top scientists of the world perform research on Quirks, he decides to bring along young Izuku Midoriya to help him soak up the experience. Once they arrive, they  are greeted by All Might’s friend and former partner, Professor David Shield who offers to help the pair settle into their new surroundings. However, their plans are interrupted after a group of villains hack into the Expo and take All Might hostage. Now it’s up to the students of the prestigious U.A. High School to somehow save the day.

Released half way through the third season of the show, ‘My Hero Academia: Two Heroes’ is about as filler-esque as an anime film can get. After providing a little backstory to help bring newcomers up to speed, the movie relocates two of the main characters to an isolated island where they can participate in a handful of new antics without interfering in the show’s main story. Of course, it isn’t long before a series of huge coincidences occur, leading to several other members of the class and some faceless villains all appearing in the same location. Oh, and what anime filler would be complete without an all-new (temporary) addition to the cast who just so happens to have a number of personality traits in common with our hero.

While this well-trodden path is often an easy way to appease the fans, it can also make the events of a big screen outing feel a little inconsequential. Sadly, that is exactly the case with ‘Two Heroes’. The somewhat ‘Die Hard’ inspired plot never appears to pose any kind of significant threat to the class of 1-A, and the events all unfold in a manner that is predictable right up until the very end (even the twist). Similarly, a lot of the show’s best characters often feel short-changed, appearing only to show off flashes of their signature personalities while serving no real purpose to the overall story. As for the villains, they too are given short shift with most of their powers and personalities being completely forgettable and it’s always fairly obvious that they will be easily brushed aside by our heroes.

This is not to say that ‘Two Heroes’ is a complete loss however, as the film does still find ways to entertain. For fans already familiar with the franchise, it’s nice to see some of the interactions between the class which allow for some welcome splashes of humour to break up the action. There’s also a promising arc for Midoriya and All Might, as the events ultimately represent a passing of the mantle that switches their roles in the heroic hierarchy. For me personally though, the real highlight appears during the opening segment of the film as we get a glimpse into All Might’s younger years. Getting to see how he introduced his heroic alter ego to the world as well as his relationship with his former partner are extremely interesting additions to the lore. In fact, so much so that you have to wonder why this material wasn’t the main focus for the franchise’s first film.

As is often the case though, it is the visual spectacle that is probably the most enticing aspect and ‘Two Heroes’ definitely shines brightest during the fight scenes. Oddly enough, this generally seems to involve a lot of things falling or exploding, allowing our heroes to hop around and run up walls which always seems to look fairly impressive. This is particularly relevant during the film’s finale that sees All Might and Midoriya fighting alongside each other (almost as equals) to defeat the final bad guy. While I would say it’s far from the best fight that we’ve seen in ‘My Hero Academia’, it is still an entertaining bout that helps to spell out the message that the film is trying to convey.

‘My Hero Academia: Two Heroes’ is a fun distraction but that’s really about as far as it goes. While the animation and action are definitely well handled, the numerous anime movie clichés prevent it from ever progressing beyond anything other than filler.