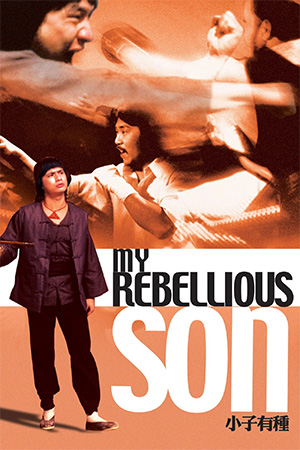 Fu Sheng is the eponymous character, Cheng, a mischievous youngster constantly at odds with his authoritarian father (Ku Feng). Helping his father in their famed health clinic, Cheng is more preoccupied with spending time with his friends and flirting with the young woman who works opposite him. These frivolous matters are put to one side when a gang of greedy foreigners – aided by a few sycophantic locals – take an interest in the valuable relic that is kept in the village temple. As a member of the security team that looks after local interests, Cheng’s father stands up to the disdainful newcomers and refuses to allow them to get their grubby mits on the priceless treasure. They will not take no for an answer though and send to Japan for a team of stoic assassins to eliminate their problem. It is this action that forces Cheng jnr. to take his family responsibilities seriously and the former upstart marches to the villains’ lair to conclude the matter.

An awkward father and son relationship, a boisterous hero with an innocent eye for the girls, a battle to save China’s ancient treasures from the thieves… ‘My Rebellious Son’ shares a very similar conceit to Jackie Chan’s ‘Dragon Lord’. Whereas Chan used his overblown, yet infectiously enthusiastic film to toy around with the genre that made him a star, ‘My Rebellious Son’ takes a very conventional route in comparison to its contemporary. The choreography is traditional, the cast is full of familiar ‘Shaw Brothers’ supporting players and the sets retain the studio-bound feel that was so common from the studio’s films. Unfortunately, it is these very things that make ‘My Rebellious Son’ a production that feels slightly stuck in a time-warp, unaware of the revolutions within Hong Kong cinema at the time.

Fu Sheng was one of the foremost actors to meld together on-screen fighting skills with a keen sense of comic timing before Jackie Chan became the undisputed master in the 80s. It’s therefore not a surprise that the late, great Shaw’s star acquits himself well as our bumbling hero and develops a good understanding with his screen father, Ku Feng. Despite the somewhat dated feel of the film overall, the performances of these two exceptional stars cannot be faulted. The flaws of this enjoyable, yet never completely absorbing kung-fu comedy are perhaps to be attributed to director Sun Chung.

Chung has given the genre some of its most accomplished works, specialising in a darker, more introspective style that always had the indelible mark of his craftsmanship. Despite his outstanding vision, he appears uneasy with the balance needed in this sub-genre, an equilibrium that very few have ever resolutely achieved. Chung has difficulty blending the comedy into the film without it becoming a jarring juxtaposition with the action. While this proves to be a mixture of tones that Chung is not used to combining, the inclusion of a very brief romance that is awkwardly forgotten about shows that such a hybrid of a film requires a different director behind the lens to make it click – a different director, not necessarily a better one.

Though the uncomfortable mixture of humour and action may scupper any chances of ‘My Rebellious Son’ being anything more than ‘good’, many will be more interested in just the quality of the latter. It is here that the real disappointment lies. For most of the running time, the fight scenes are very average and seem to belong to a film five years older than this one. None of the choreographic exuberance that was in such large supply in 80s Hong Kong film-making is in evidence here; instead, the one-on-one and one v. many battles lack any real spark of invention and the talented cast just appear to go through the motions. Only the last ten minutes feature a director and choreographer upping the ante – it is the climatic fight between Fu Sheng and Chan Hui Man that earns this an extra half star. Whether or not the inspirational ending is worth the previous 80 minutes is dependent on how much charm the rest of the production holds for viewers.

‘My Rebellious Son’ is not devoid of potential – a first-rate star, a legendary villain and a skilled director should ensure something much better than average. As it is though, this is a film that shows how Shaw Brothers productions were left standing by the competition at this point.  With a studio-bound feel that ages it beyond its years (just see ‘Dragon Lord’s use of exteriors to cement this thought) and an ambling storyline that sees the useful sub-plots cast aside, ‘My Rebellious Son’ rarely shines.