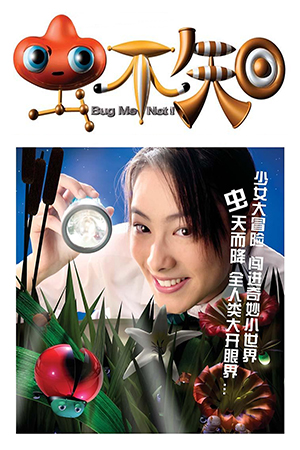 When it comes to my personal movie tastes, one look at my DVD collection may well lead people to believe that I’m someone who will only watch a film if it contains at least one neck snapping.  Okay, so I admit at times this may be true, but being only human I also have a softer side (of course if anyone mentions it, I’ll snap you like a twig!) that leads me to seek out titles such as ‘Bug Me Not!’.  The idea of a traditional romantic storyline mixed in with some crazy animated antics had me intrigued and the trailer certainly looked like a lot of fun.  Having watched it though, all I can say is that first impressions are not always right.

Moon (Leong) is a bit of an outcast at school and never seems to be able to do or say the right thing.  Perhaps for this reason, she finds herself attracted to one of the local boys (Bolin) who constantly makes a fool of himself for the sake of his job and clearly lacks the charm or sophistication of most men she has encountered.  Unfortunately though, Moon isn’t exactly the most outgoing girl and is forced to watch him from afar as she has no idea how to make the relationship progress.  Luckily for her though, a chance encounter with a bug unleashes some kind of power inside of her that actually allows her to talk to the bug!  Now with Cootchie the bug at her side (yes I admit, Cootchie sounds more like a disease than a bug) she might actually be able to get the local boy to notice her but she’ll have to be careful, there may well be others out there who also possess special powers…

Although I’m loathed to completely condemn this film as it remains a relatively harmless time killer, there is no escaping the fact that it is disappointing in almost all of the elements that it attempts to combine.  First and foremost, this is immediately noticeable in the film’s vital romantic narrative as the chemistry between the two leads is practically non-existent, making it a very hard pill to swallow.  Personally I attribute this to Chen Bo Lin who comes across as rude and irritating, two very distinctive traits that make him hard to warm to and fail to allow the audience to appreciate why Moon would fall for him in the first place.  Added to this, the film introduces a ridiculous sub-plot that revolves around a “super powers club” that not only throws a handful of even more tedious and annoying personas into the mix, but also appears to be nothing more than a vague attempt to explain the inclusion of animated bugs.  Finally, you have the all important element of comedy that should really be the films saving grace. Unfortunately though, the majority of it is far too slapstick, even by Asian standards, and is barely worthy of a smile at the best of times.

Taking all this into account though, there are still a couple of elements within ‘Bug Me Not!’ that make it bearable.  For a start, Isabella Leong emerges as a real talent who is not only very easy on the eyes but also an extremely capable actress who displays an alarming knack for playing a leading lady.  At the tender age of 17, she shows a remarkable amount of maturity, never appearing overly concerned that she is the centre of attention yet at the same time retaining a childhood innocence that doesn’t exude arrogance.  Alongside her, the animated bugs also turn up trumps despite their somewhat limited screen time.  They are clearly drawn and voiced with the intention of being comical and each of their scenes is always a pleasure and never overly sickening.  In fact, had the film spent more time focusing on Moon and her connection with the bugs rather than the inept boyfriend or super powers scenarios it may have been a far more appealing prospect.

‘Bug Me Not!’ is an extremely lightweight production that is often so cringeworthy that you’ll have to resist the urge to hurl your remote at the screen. That being said though, it is still a relatively easy watch that contains a few sparks of entertainment, mainly thanks to the bugs.  However, it’s more likely to be remembered as the film that bought Isabella Leong into the mainstream rather than a bold leap forward for Hong Kong cinema.