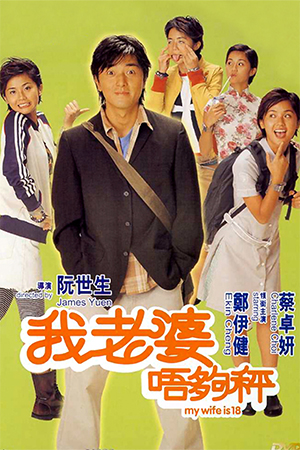 Let me start off by shocking everyone: I think Ekin Cheng has steadily improved and I actually don’t mind watching him on screen. Cheng has long been the butt of many jokes and there’s certainly no doubt that some of it is deserved; many of his earlier roles were mannequin-like in their complete lack of emotion or facial expression. Nonetheless, it seems that recent films have given him a chance to act and the difference between the Cheng of ten years ago and now is considerable. He’s still no Francis Ng or Lau Ching Wan, but he offers a certain charm that strangely succeeds most of the time. Teaming him up with ‘Twins’ starlet Charlene Choi seemed to be an attempt to give Cheng’s faltering career (it’s ironic that, now he’s acting, his films are failing) a much needed shot in the arm.

Cheung is a reserved professor whose attempts to write a thesis on women fails miserably due to the fact that he has no understanding of his subject matter. While studying in London, Cheung decides to appease his loving family by marrying a young woman in an arranged marriage. The ‘woman’ turns out to be an 18 year old student named YoYo (Choi). who is equally eager to please her family and so agrees to the wedding. After a whirlwind ceremony, Cheung and his new bride write a post-nuptial agreement that states that they will be divorced one year  later without any complications between the two. On venturing back to Hong Kong, Cheung meets YoYo again and, due to the fact that he is nowhere to stay, agrees to sleep at the flat until he can find his own flat. The unusual husband and wife couple gradually begin to learn more about each other as the days pass and YoYo suggests that Cheung should interview her fellow students at an all-girls school for his thesis. Cheung, however, decides to go one step further and is given a teaching assignment at the school with his wife unaware of the move. When YoYo learns of this she is naturally shocked and a series of mishaps mean that their secret marriage is barely concealed from the school. Further complications are added when Miss Lee, one of Cheung’s fellow school teachers, begins to fall in love with him while YoYo slowly discovers that her feelings towards him are deeper than she ever thought.

There is one thing that hamstrings ‘My Wife Is 18’ and effects it in such a way that a considerable amount of enjoyment is lost. It’s not Ekin Cheng; he’s perfectly capable in the lead role. Nor is it the unusual concept – even this has a workable quality to it. The main failing here is Charlene Choi. After a solid performance in ‘Funeral March’ I was perhaps expecting too much, but her performance here was one of the most annoying in recent memory. Her character, YoYo, is one of the most immature and thoroughly uninteresting characters ever to have arrived in the rom-com genre – this is so much the case that she seems nearer to 8 than 18. The thought that Ekin Cheng would end up falling in love with her is so ludicrous that it renders the whole film frustrating to a critical extent. There are some redeeming features – the cameos by Richard Ng and Stephanie Che are well worth watching while Bernice Liu (as Miss Lee) is a charming addition to the cast. The opening 15 minute section that was filmed on location in London also makes a pleasant change.