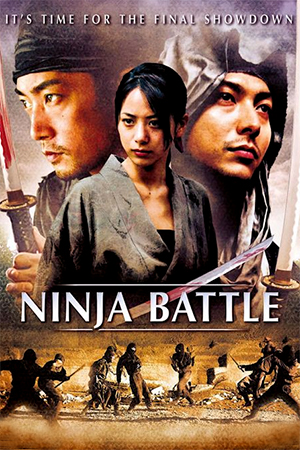 Set after the events of ‘Tensho Iga no Ran’ and ‘Iga no Ran: Kosoku’, ‘Ninja Battle’ finds the Iga clan on the run as Oda Nobunaga and the Kouga ninja draw near. As the battle rages on, we follow a small group of Iga ninjas after they discover a dead body and a restrained woman inside a nearby cave. The woman claims to be a member of the Kouga clan who was being forced to help the Igas against her will. However, as events unfold it would appear that there is more to the woman ‘s story and death is definitely in the air tonight.

‘Ninja Battle’, originally titled ‘Sengoku: Iga No Ran’, is the third film in Seiji Chiba’s ninja series. Much like the previous outings, this is a fairly short-lived, low budget affair that uses a historical backdrop as an excuse for some ninja action. Well, I say action but the film is probably better described as a mystery that takes place entirely inside one very dimly lit cave. As you might expect, this doesn’t exactly allow for much scope and the film lacks both the depth and the required tension to execute the story successfully. Instead, it feels more like an hour of people arguing before we get a handful of silly plot twists and an extremely unsatisfying conclusion.

As I said before, there isn’t really much in the way of action either and the term “battle” is extremely misleading. I guess you could say there is a battle going on outside the cave somewhere, but we certainly don’t get to see any of it on the screen. The only real fights we do get aren’t exactly much to write home about and the low budget clearly doesn’t help matters. There are hints of some choreography but most of the time it’s just a couple of basic swipes before the duel is done. There are also a few moments where one of the combatants will give a display of exaggerated strength, such as smashing through rock, but it really isn’t that exciting and the majority of the fights will disappoint.

If you’re looking for a solid slice of ninja action, then ‘Ninja Battle’ definitely isn’t the movie for you. The film is a fairly tedious mystery that will do little to excite or entertain even the most desperate viewer.