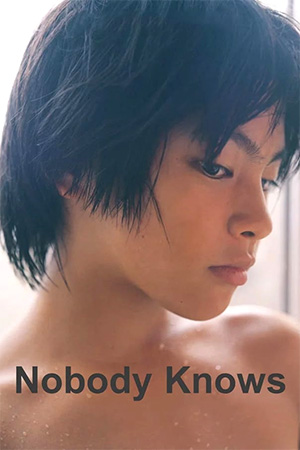 Akira is the eldest of four children, each with a different father but all have the same witless dreamer of a mother in common. Frequently working away from home, the mother, Keiko, twelve-year-old Akira is put in charge and has to keep his half-siblings hidden from the apartment block landlord who is blissfully unaware at how many occupants there actually are. While the pre-teen is competent at looking after the household for a short time, his skills are pushed to breaking point when his mother disappears for an inordinate amount of time. With very little money and the need to keep away from the prying eyes of the social services, Akira uses his wiles to feed and support his family. Yet there is only so much the youngster can reasonably do and tragedy is just around the corner.

Based on the Sugamo child-abandonment incident that shocked Japan in the late 80s, ‘Nobody Knows’ is social realism for the big screen, making a notoriously difficult style suitable for general cinematic consumption. That said, this is not a film that compromises. As quietly insidious as seeping methane, this pragmatic storytelling leads to some disturbing scenes and a heavy cloud of melancholy hangs over Akira’s heroic efforts to fill a role he is ultimately incapable of.

A true story such as this could be ripe for a melodramatic big screen treatment, intrusive music and obvious direction perhaps expected. Indeed, this is the kind of horror story that could quite easily be a made-for-TV movie designed for ‘Hallmark’. Such a route would still yield powerful results – it’s such a heart-breaking story that it would be impossible to be otherwise – but Hirokazu Koreeda favours an understated style that multiplies the eventual resonance. There’s a tragic resignation about the children’s situation, a fatalist look on their faces that eats through their attempts to act the age they actually are.

Koreeda fills scenes with grinding monotony and allows every plot turn to happen at its own delicate pace. This does mean that the first sixty minutes is overly leisurely, at times seemingly sedentary, but this all builds up to the dramatic final twenty minutes. He also refuses to give us the safe resolution we ask for and ends on a note of uncertainty, emphasising his realistic approach to the story. Do not be misled by its gentility; ‘Nobody Knows’ is a wolf in sheep’s clothing.

The most vital piece of praise should be reserved for the exceptional child cast though, especially Yuya Yagira as Akira. To see performances of this quality given with material as difficult to convey as this is a humbling experience. ‘Nobody Knows’ features astonishing efforts by Yagira and his young co-stars, so much so that this sometimes feels like a documentary rather than a feature film. The subtlety these actors and actresses convey is more effective than the empty histrionics that could have been utilised in a lesser production. ‘Nobody Knows’ is worthy film-making, memorable well beyond its two hour duration and recommended to anyone seeking challenging, not necessarily uplifting cinema.