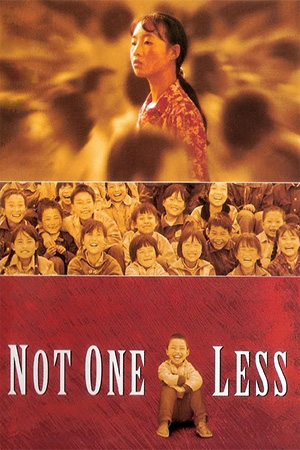 When the resident teacher at a remote Chinese school is needed to look after his elderly mother, the village elders see only one possible solution – hire a temporary replacement for the school. To this end they hire a young twelve year old girl, Wei, to teach the children, but she must adhere to one condition to be paid: each one of the 23 students must be accounted for, ‘not one less’, otherwise she will not be paid. Agreeing to this, Wei starts her work at the school  and finds that her assignment is far more difficult than she at first anticipated. Firstly, the lack of funds means that even chalk is at a premium and teaching materials in general are rationed. Then there’s the awkward young pupil Huike who causes trouble in the classes and distracts Wei from her important work. One morning, Huike is missing from the class and his fellow students tell Teacher Wei that he has gone to the city to earn money for his destitute family. As Wei is aware that she will not be paid if Huike is not in the class, the young teacher decides to journey to the city to find him and persuade him to come back to the village. The first problem that needs to be faced, though, is the cost of the bus to the city, so the ever resourceful Wei utilises the abilities of her students to raise the money.

Zhang Yimou once again blends together a simple, heart-felt story with a subtle social critique that works seamlessly. With a gritty, down-to-earth atmosphere created within the film, Zhang recalls the Neo-Realist Italian films of the 40s and 50s, though he naturally makes sure there’s enough uniquely Chinese sensibilities within. As with the Neo-Realist classics like ‘The Bicycle Thieves’ and even some of the new Iranian movies, the narrative is deceptively austere yet manages to weave in moments that examine the society around the main characters. While Teacher Wei travels to the city and tries to locate her mischievous charge, the viewer is drawn into the frustration of the city bureaucracy and the inequalities her own village faces. Such a seasoned director as Zhang Yimou ensures that this device is gradually introduced and never appears to be mere cinematic rhetoric.

‘Not One Less’ is the kind of film that would usually earn the phrase ‘slow-burner’. The opening twenty minutes are very deliberate, but hardly give the viewer much to inspire them. Thankfully, the characters grow in stature and, when Huike leaves for the city, the film really hits its stride. As the strengths become more obvious, lead actress Wei Minzhi takes centre stage and gives an exceptional performance; the scene of her waiting outside the television station is a fine example of her growing in confidence. The young cast prove to be the main reason why this delicate drama reaches the heart – no matter what Zhang Yimou’s goals were, it is this aspect that is remembered long after the final credits have rolled. ‘Not One Less’ is slow-moving and starts awkwardly, but patient viewers will be rewarded with a very memorable Chinese production.