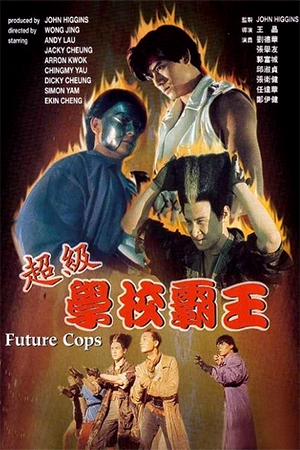 A truly incredible Hong Kong cast join together in this wacky and entertaining fantasy comedy.

In the Hong Kong of the near future, a vicious supervillain is about to stand trial for his numerous crimes and, knowing he’s heading for jail without any doubt, sends his cohorts back in time to assassinate the presiding judge. With shades of ‘Terminator 2’, the villains go back to face a high school version of the soon-to-be-respected judge and plot to get rid of him. Thankfully, three of the eponymous Future Cops are also sent back to defend the youth and make sure he can get through those all important school years. After various comic incidents – mostly emanating from the Future Cops ability to impress the high school girls – the two opposing factions are forced into a wild and frenetic final battle.

Apart from the all-star cast that was assembled for this production, the film is perhaps best known for the extensive use of the characters from Streetfighter 2. With Jackie Chan owning the copyright (which he brought during the production of City Hunter), Wong Jing adjusts the looks and names slightly. However the characters are still instantly recognisable and the abundant special FX used to bring their powers to the screen are impressive to look at. The opening ten minutes and finale feature an all-out fight which uses the characters of Guile, Dhalsim, Blanka, Bison and many others with some aplomb and seeing so many Hong Kong superstars on the screen is certainly enjoyable. As is sometimes the case with a Wong Jing film though, the rest of the film is padded out considerably to balance the budget; these scenes slow the film down quite drastically, but are not as unbearable as in some other Hong Kong action/comedies. Dick Cheung can also wear down the strongest viewer with his grating screen presence, but here he manages to give a slightly more restrained performance than usual.

In summary then ‘Future Cops’ is definitely worth a look for its crazy action and glittering cast, but be warned that the middle section may make you reach for the fast-forward button.