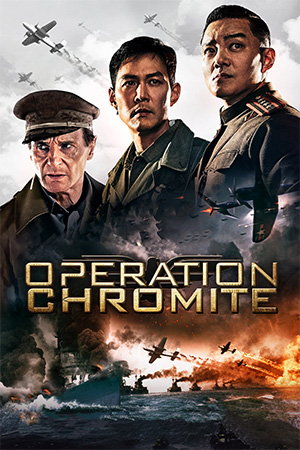 One’s enjoyment of ‘Operation Chromite’ will depend on one’s tolerance for big budget, over-the-top war blockbusters from Korea and all the melodrama and bombast (and historical inaccuracies) that come with them. From director John H. Lee (who helmed the equally slick and bombastic ’71: Into the Fire’), ‘Operation Chromite’ isn’t much different from any other recent big budget Korean war epic (and won’t win over the harsher critics out there!) but on its own well produced terms and commitment to delivering spectacle, certainly entertains.

Despite the obvious stunt casting of Liam Neeson as General Macarthur (while a bit cartoony in his portrayal he’s perfectly solid and commanding in the role), the flick mainly concerns itself with the team MacArther sends on a covert mission behind enemy lines. The UN Supreme Commander plans a secret strike of the North Korean held town of Incheon and in order to do so, he sends in a small team of crack South Korean soldiers to steal some plans that will make his strike a success. The squad, headed by the strong willed Jang Hak-Soo (Lee Jung-Jae), pose as North Korean soldiers and infiltrate the ranks of the vicious Senior Colonel Lim Gye-Jin (Lee Beom-Soo). Yet, with much at stake plans don’t go according, identities are blown and a frantic dash to complete the mission and outrun Lim Gye-Jin’s ever swarming army ensues.

While the production values (save for some ropey CGI here and there) are no doubt slick and impressive, meaning the 50s era is recreated in a visually impressive manner and there is scope for mucho explosive action, it’s the clock and dagger nature of the covert operation which provides the refreshing tension filled entertainment. The film starts off at a run as the team of spies are quickly recruited and thrust into deep cover in enemy territory. Momentum is kept up with a quick pace, an effective score that drives the tension and action, and some fine acting from the likes of Lee Jung-Jae and Lee Beom-Soo, the latter particularly vile as the nasty North Korean leader (staying just the right side of pantomime villain!). Once the team’s cover is blown the action and spectacle erupts but the opening salvo of tension soaked spy games makes one invest in proceedings before all the whizz and bang takes over.

Not straying too far from formula, Lee can’t get away from the obligatory jingoistic melodrama, predictable deaths (signposted a mile off) and preachy speeches and platitudes that often plague this type of war blockbuster. Fortunately, the pace and tension rarely lets up meaning these annoyances are over fairly quickly as the next burst of violent war action erupts: Lee knows how to stage impressive war combat that doesn’t flinch in its depiction of its combatants being violently slaughtered. These scenes are well staged and come the finale saturate proceedings with drama and intrigue falling by the wayside for explosion heavy action.

Not quite as accomplished as say ‘Brotherhood’ or ’71: Into the Fire’ and certainly heavy handed in its approach and reliance on cliché, ‘Operation Chromite’ is nevertheless an entertaining war thriller-come-spectacle that should certainly appeal to the war film enthusiast out there.