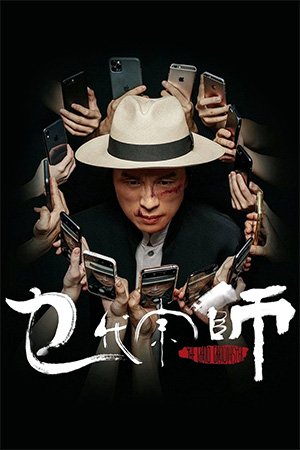 After scoring a big hit with ‘Agent Mr. Chan’, comedian Dayo Wong returns with another cinematic pastiche. This time he tackles an idol a bit closer home, culturally speaking. At least, that is what the Ip Man-styled promotional material suggested.

Kung-fu teacher Ma Fei Lung comes from a long line of masters. Whereas his ancestors have concentrated on their abilities, Ma has focused on creating a business empire built on the famous name and soon becomes famous throughout Hong Kong. Yet a chance encounter with former female boxer Chan Tsamg – where the supposed grandmaster is humiliated in a fight – helps him realise that his expertise is all a sham and even those in his school are in on it. As the film images make their way online and Ma finds his empire crumbling, the former grandmaster now understands that there is only one chance of redemption; to beat Chan Tsamg in a televised rematch and show the superiority of his family style over Western boxing. Yet as he trains for the event – with Chan’s old trainer/father no less – he begins to be drawn to the taciturn ex-boxer who has her own demons to battle.

As alluded to earlier, this could be seen as a parody of the avalanche of Ip Man films that have arrived over the past decade, not least of which is Wong Kar Wei’s ‘The Grandmaster’. Unfortunately, like the previous comedy ‘Agent Mr. Chan’, the promotional art-work is the wittiest part of the whole experience – kudos to whoever was in charge of this. ‘The Grand Grandmaster’ isn’t an extended parody of the sub-genre, but that isn’t necessarily in its favour; it might have been a lazy target, yet it could have generated a few laughs if produced correctly. ‘The Grand Grandmaster’ is a stand-alone comedy and a rather weak specimen it is too.

Dayo Wong is known throughout the Cantonese speaking world as a comedian who combines intelligent, snappy wit with social satire. That might mean that non-native speakers are lost, but it hints at the skill that the star is known to possess. ‘The Grand Grandmaster’ is a tiresome comedy that has no unique voice, no crafted humour and no life beyond its very pallid reference to Ip Man. It’s full of the kind of prat-falls and one-note jokes that were looking obvious in the early 90s, but now appear like creaking fossils. And yet Dayo Wong as leading man is not without his charm; he has a certain dead-pan charm that occasionally makes itself apparent despite the best efforts of the story. ‘The Grand Grandmaster’ barely has enough good material for a TikTok clip though and it should be noted that this drudgery goes on for a full two hours. There’s a commendable story regarding how Wong funded the project and his pride in local audiences, but he offers them something that is frustratingly bland.