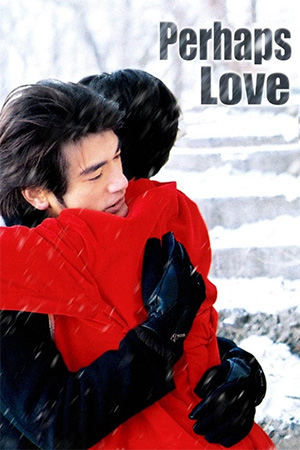 Hong Kong’s official entry for the ‘Best Foreign Film’ category of the Academy Awards is a visually ripe post-modern musical which borrows the ‘film-within-a film’ concept from the glorious ‘Singin’ In The Rain’ (minus the ebullient spirit of the Gene Kelly film) and takes it off into the direction of angst-ridden drama.

Young film star LinJian-dong (Kaneshiro) arrives in Shanghai to start work on the new production by jaded director Nie (Cheung), but his appearance in the cast reveals an ulterior motive. Lin is more focused on his co-star and ex-love Sun Na (Xun) than the actual task in hand and he finds himself haunted by memories of the love they originally shared. Sun has long forgotten the past, though, and pretends that her years scraping a living together with Lin never happened. Art imitates life as the storyline of the film mirrors this drama perfectly and the two stars confront their past through the characters they play. Director Nie also has feelings for his muse though and is troubled by her seeming indifference to him. Gradually Sun’s icy demeanour begins to melt and her hidden emotions begin to resurface, a change in character that recalls the woman she once was.

With a luscious Shanghai setting made to look especially sumptuous by Peter Pao’s exquisite cinematography (not to mention Christopher Doyle’s work in the Beijing sections), ‘Perhaps Love’ is a feast for the eyes though offers less nourishment for the soul. That’s not to say there isn’t much to savour here, but it is an object of wonder rather than a production that engages the audience emotionally. Each character is tortured in that martyred way that seems unique to the worlds of arthouse cinema; much looking into the middle-distance by the players and long, solemn faces attached to the bodies of beautiful film-stars. Peter Chan, though, has tried to dabble in a genre that has only just been rejuvenated in Hollywood let alone really embraced in Asia and for such an adventurous spirit, he deserves acclaim. Chan may not have given us an emotional maelstrom, but ‘Perhaps Love’ is far from a waste of time.

Brimming over with spectacle and style, this is the kind of Eastern production that always seems to entice the Western critics perhaps due to its reverence to the great Hollywood musicals of the past. ‘Perhaps Love’ does not share the usual exuberance that celebrated musicals of the past have enjoyed and takes its themes more from classical opera than the traditional musical. Nevertheless it revels in the visual opulence that films like ‘Moulin Rouge’ and other Hollywood musicals have been keen to exploit while also reserving its energies for the lavish musical numbers. Peter Chan’s film is therefore an accurate conversion of a popular genre, but also an attempt to subvert certain conventions and by so doing celebrate its Asia identity.

The litmus test for movies of this ilk is obviously the set-pieces and these do not disappoint. A knowledge of Mandarin is an obvious advantage, but the sheer passion behind the songs means that they transcend the language barrier. It also helps that the two male leads have very distinct vocal talents that add their own individual weight to this heady blend. Peter Chan also calls on an array of worldwide talent to give these dramatic routines the stamp of quality they need and the combination of East and West is a joy for the eyes and ears. These also prove to be the more involving moments of the production as the standard scenes of drama lack resonance while there are too many of the aforementioned self-conscious touches that are obligatory in many ‘arthouse’ films.

The characterisation may be flawed and the emotional content calculated, but the narrative structure is admirably executed. A post-modern enigma within a puzzle, it toys with our perceptions of reality and what is actually fictional. This succeeds in keeping the viewer alert and offering a gentle challenge that most other genre films rarely provide. While the other short-comings ultimately unbalance the film, the narrative is masterfully manipulated by a director who is not intimidated by the relatively extravagant budget. Chan also plays to the strengths of his cast, letting Takeshi Kaneshiro trade on the pained matinee-idol he often plays and offering Zhou Xun as an exquisite foil for him to play off. Jacky Cheung is good as the troubled director and, despite appearing slightly too young to give the part its full gravitas, gives some indication of what is going on beneath his steely exterior.

‘Perhaps Love’ triumphs with its production values, flexibility and ability to fully realise the potential of its exotic setting. Though it disappoints with the actual heart of the film, there is nonetheless something quite welcoming about a work that is so different from the usual fare.