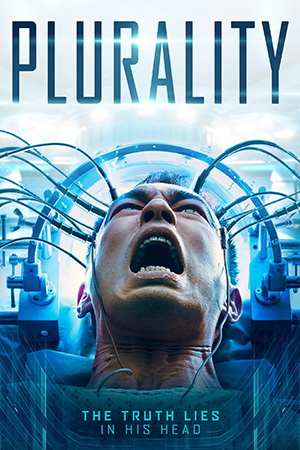 A major bus crash costs the lives of everyone on board apart from one unnamed man who is left in a comatose state. Among the victims was a criminal who had kidnapped the son of the country’s legislator, but with their death, hopes of finding the boy again appear unlikely. It is then that the one survivor is chosen for experimental technology where the personas of everyone on the bus are injected into him. The various characters begin to pull the guinea pig from one extreme to another, while the detective in charge has doubts as to whether this unique project has any chance of success. Yet there is more to the relationship between the deceased passengers than meets the eye and as the investigation progresses, loyalties and agendas are gradually revealed.

It’s clear that the makers of ‘Plurality’ have been inspired by M. Night Shyamalan’s hit film ‘Split’. Taking the concept of multiple personalities and giving it a sci-fi twist, ‘Plurality’ is a confident and well shot attempt at copying the Hollywood gloss. Taiwan isn’t known for its forays into science fiction yet ‘Plurality’ is accomplished and builds up the tension quite successfully. The story runs out of steam just after the halfway mark, yet there’s much to be impressed with here.

The difficulty of having such a solid premise is how to give it the ending it deserves and that’s something that Aozaru Shiao’s film doesn’t manage to achieve. It is also a challenge to balance all of the characters within the main protagonist and give their stories equal weight, a matter that also proves a problem near the end. Yet Tony Yang is excellent in the lead role, conveying the various personalities in a subtly effective way, providing the real drive for the film. And this is needed as, when the narrative turns from intriguing science fiction thriller to more standard action fare, Yang carries the audience through it all.

‘Plurality’ is a solid sci-fi thriller that doesn’t quite live up to the excellent premise. It’s skilfully shot, well acted and often more than just distracting, yet it falls just short of being memorable.