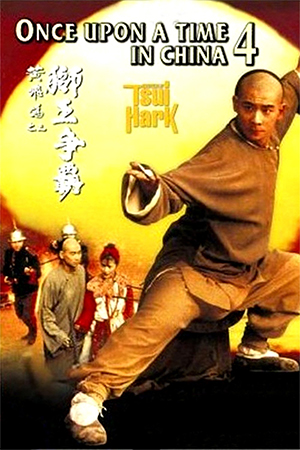 Made in the same year as part 3, and following almost directly on, it was a bit of a surprise when Jet Li (after falling out with Tsui Hark) abdicated his WFH throne, and the mantle was passed to the younger, extremely talented Wu Shu player Vincent Zhao (also known as Chiu Man Cheuk). To me, Zhao is equally adept as Jet at filling the role of Wong, as although he is young, he has the physical grace and sombre demeanour needed to carry it off. Sometimes even seeming more suitable for the role, as he seems to exude a greater air of responsibility.

The plot follows two distinct lines. Firstly, after his heroics at winning the Golden Lion Medal in part 3, he is asked to compete in a new competition featuring super-powered lions from various countries (most notably Germany!), and they fear that China will lose face if defeated. While this is an ongoing problem, so too are the ladies of the Red Lotus clan, whose aim is to remove all foreigners. Unfortunately, Wong, in saving some Gwailo’s, becomes a target of their fury and further problems ensue. As with the first 3 instalments, much of the plot is driven by important events in China’s history and filled with both overt and subtle political comment.

Action-wise, Zhao is the physical equal of Jet Li, at least in terms of his Wu Shu and acrobatic ability, and gets to impress with some excellent moves. The choreography is not as slick as part 2, obviously suffering without Woo Ping’s involvement, however many of the action set pieces are extremely well shot and entertaining. Unfortunately, the finale is a slight let-down since we see Hung Yan Yan, Vincent Zhao, Billy Chow and Chin Kar Lok take part in what, on paper, is a dream battle. This is not the case and it is a damp squib compared to what I was expecting.

The action (ladder fight excepted) is equal to part 1, but not the dramatic element, and it is certainly not the equal of part 2 for fight choreography. As a result it falls slightly behind earning a respectable 4 stars. If you liked the first 3, you will definitely enjoy this too, and will not feel your time has been wasted in tracking it down. It is a shame that Zhao has not been given more quality roles, as outings in recent films such as ‘Body Weapon’, ‘Fist Power’ and ‘The Blacksheep Affair’ have not fulfilled the potential seen in this film and other quality productions like ‘Green Snake’ and ‘Fong Sai Yuk’. It seems as though he, like Jet used to, has trouble adapting to modern day actioners, and I hope it is only a matter of time before he shines again.