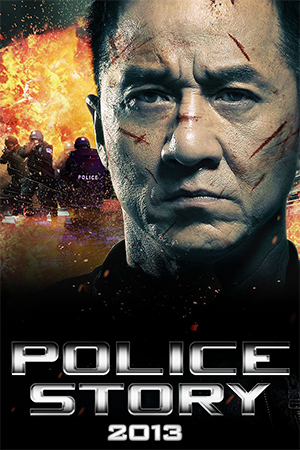 A year after the release of ‘Chinese Zodiac’ – a return to the ‘Armour Of God’ franchise – Jackie Chan unleashes ‘Police Story 2013’ or ‘New New Police Story’ as it might be tempting to call it. ‘Police Story 2013’ though has no link to the great series of the 80s and 90s and attempts to move Chan away from the action comedies of the past and into grittier thrillers.

Veteran policeman Zhong Wen (Chan) travels to Beijing to visit his estranged daughter who works in a hip city nightclub. The relationship between the two has been frosty ever since the death of Zhong’s wife and matters get even more tense when the weary cop meets his daughter’s new boyfriend, club manager Wu Jiang. Such things pale in comparison to the drama just around the corner as Wu and his cohorts show their true intentions and barricade the club, keeping the V.I.P. Guests as hostages. Zhong is thrust into a stand-off between trigger happy Beijing police snipers and the leader of the gang whose unusual ransom demands are finally revealed.

Much has been made of Jackie Chan’s apparent courting of China and rejection of his Hong Kong heritage: he’s been outspoken about issues in both countries, a fact that has alienated his traditional fan base, but has seen his popularity soar on the Mainland. The rights and wrongs of his opinions – or, for that matter, their motives – could be argued by both sides, yet from a cinematic point of view, ‘Police Story 2013’ seems to be an overt move towards the north. Of course there have been other Mainland productions involving Chan, but the resurrection of one of his most famous motifs and relocation to China seems to be a statement of intent.

‘Police Story 2013’ is a good thriller – not great, but certainly entertaining. Any film that Jackie Chan is in has a danger of being a victim of the star’s legendary legacy; so much is expected that if his skills of yesteryear aren’t present there tends to be an attempt to pour derision on the overall movie. Chan is partly to blame with this film though – can anyone expect a film with Jackie Chan in that’s called ‘Police Story’ not to recall his halcyon days? There has been moves to draw a line under the past and insist this is a new, reinvented, completely separate entity, but why call it ‘Police Story’ at all? In terms of tone and execution this is more akin to a lesser ‘Die Hard’ clone than anything else.

Chan has often been underrated as an actor and ‘Police Story 2013’ is another attempt for him to play things straight and not rely on his wonderful physicality. Unfortunately, even for a man of 59, Chan throws in some impressive moves and slick movement in a few gritty fight scenes – if there’s one thing bound to annoy the noteworthy critics is the, shock-horror, sight of a ‘serious actor’ roughing things up like an action star! Nevertheless, he has reached an age where his apparent weariness gives his performance an extra gravitas (a fact utilised by director Ding Sheng in their last collaboration ‘Little Big Soldier’). Chan gets the best out of the battle-scarred veteran cop role he is given despite it’s over-familiarity and he clearly trusts the man behind the lens to get the best out of him, something which hasn’t always been the case.

‘Police Story 2013’ is strangely low-key and lacks genuine tension – the villain never really seems to be a threat, a fact that dissipates whatever atmosphere there would have been. Yet there is much to appreciate here, especially a plot with enough turns and twists to keep the viewer attentive and characters who go beyond their stereotypes as the villain’s motives unfold. While ‘Crime Story’ still stands head and shoulders above it as a ‘serious’ police drama, this new chapter in Chan’s career could be a fruitful direction. His next challenge, if he is to truly get respect as an actor, is to appear in a film without any action or thrills – a Chan romantic drama anyone?