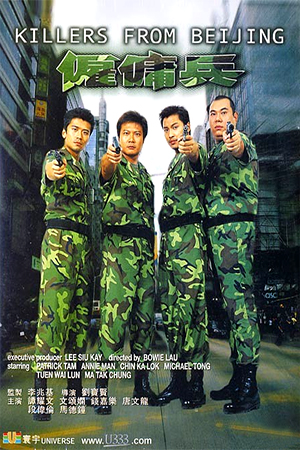 The main thing that attracted me to ‘Killers From Beijing’ was the presence of actor Chin Ka-Lok.  Ka-Lok has always been an immensely talented on-screen fighter who has put in top performances in films such as ‘Martial Arts Master Wong Fei Hung’ and ‘Operation Scorpio’. I was hoping that ‘Killers From Beijing’ would allow him to shine in a modern day actioner, but sadly I couldn’t have been more wrong.

Triad boss Mr Tseung is having trouble with the leader of a rival gang by the name of King Kong.  He sends his right hand man, White Chick, to hire some mercenaries from China who will wipe out all of his problems.  Cat, Wan, Miu Choi and Pig Skin are four ex-soldiers who have little to do to fulfil their lives and could really do with the money.  They are obvious candidates for the positions and are relocated to Hong Kong where their task is simple; assassinate King Kong and make it look like an unrelated incident.  Things are going well until they head back to the rendezvous point where police are waiting for them and they look seriously outnumbered.  Their only option is to fight their way out and hope that they make it back to the mainland alive.

Oh dear, where do I start with a film that seems to have so many major flaws?  Well, I suppose that for any film the story is always a priority and with ‘Killers From Beijing’ it proves to be the first stumbling block. Throughout the running time, you get the distinct feeling that everything is being made up as it goes along and the dialogue is pretty much meaningless.  There’s no real attempt to develop or explain any of the characters and the majority of their interactions are short and not particularly sweet. New characters are also thrown in every couple of minutes, seemingly with no real purpose other than as a means to help the director wrap up a scene.

When it comes to the acting, it’s pretty much on a par with the story. Leading actor Patrick Tam gives one of the most static and emotionless performances I’ve seen in a while. This is particularly noticeable in two of the (supposedly) more dramatic moments in the film as Tam is incredibly straight faced and never allows the audience to build up any affiliation with his emotions or the tragedy that engulfs his situation.  Meanwhile, Chin Ka-Lok gets little to do both acting and action-wise as for some reason he is given the role of the getaway driver. He remains absent from the majority of the main gunplay and you could argue that this is little more than an extended cameo.  All the remaining members of the cast range are also so poor that they barely warrant mentioning, but you could also put this down to a general lack of direction.

With most Hong Kong movies you can normally rely on the action to enthral even if the surrounding film is less than satisfying. Unfortunately, even here ‘Killers From Beijing’ manages to disappoint.  If I was being generous I could say there is one above average shoot-out as the gang perform the hit on the triad boss, but really this is just one dim light in an otherwise dismal display of action. Most of the sequences rely far too heavily more on the fake blood splatter, and there is no sense of style from either the choreographer or director.

There really is very little reason to recommend ‘Killers From Beijing’ as it is disappointing on just about every level of competent film-making.  Avoid it even if it is in the bargain basement bin.