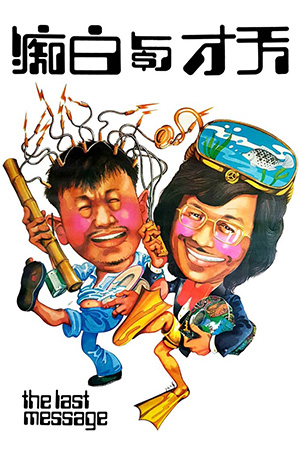 After the gigantic success of ‘Games Gamblers Play’ and before the film he would forever be associated with, ‘The Private Eyes’, Michael Hui gave local audiences ‘The Last Message’. The result was a cinematic outing that was far from his most memorable.

Ah Tim (Michael) is the sly worker of a mental institution who has little interest in his work. Within the same institute is Li (Samuel), one of the head male nurses there who shares Ah Tim’s apathy toward the job. A chance to change the status quo is presented when a new patient, Cheng (Chiao), is admitted to the hospital and catches the pair’s attention with his endless talk of treasure. At first they put this in the same bracket as the newcomer’s babblings about a princess, but they soon begin to believe that he really does hold the key to a small fortune. Ah Tim succeeds in finding a portion of the patient’s treasure and learns of even greater wealth at a secret location. However, when Cheng suddenly dies, the two fortune hunters are left with a fractured trail to follow in their bid to reach the real booty.

Within a very illustrious crowd of the Hui brothers other comedies, ‘The Last Message’ fails to stand out and succeed in giving the audience a taste of their very best efforts. Mainly featuring Michael and Samuel – though Ricky does get a very amusing cameo that proves to be one of the film’s highlights – this is, in some ways, more plot-driven than the classic Hui films. Usually this could be seen as a good thing, but here the brothers are slightly restricted by the material and even though the plot has potential, it is not used to great effect. With these things in mind, ‘The Last Message’ doesn’t compare well with the best Hui comedies such as ‘The Private Eyes’, ‘Security Unlimited’ and ‘The Contract’. It lacks the spark of genius that infused most of Michael’s best work and the characters are slightly less likeable than usual, which does the film no favours. Importantly, even a lesser Michael Hui film is worth watching and there are still enough comic moments to keep most viewers happy. Michael and Samuel’s exceptional chemistry is once again highly entertaining, though a longer appearance by Ricky would have been welcome. Not vintage Hong Kong comedy then, but there are far worse films to spend 100 minutes watching.