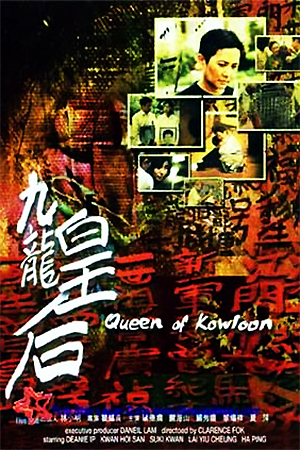 Downtrodden Ah Sei (Yip) works exceptionally hard for those she loves, in particular her adopted daughter, Irene (Kwan) who she dotes after. Despite being made to feel unwelcome by Irene’s real mother, Ah Sei toils every hour of the day in menial work so that she can support Irene’s dream of opening a patisserie. Tragedy is just around the corner though and when an accident robs Irene of her parents, she turns on Ah Sei and blames her on coming between them before their death. With her only meaning in life taken away, the bullied loner throws everything into winning back the love of Irene.

While Clarence Fok’s directorial style is heavy-handed even in his best work, his lesser films are positively asphyxiated by his bludgeoning approach. Over-wrought melodrama ‘Queen Of Kowloon’ is of the latter category, barely putting up a fight for life as it is smothered in an avalanche of crude melodrama. Indeed Fok’s other work may seem to stray more towards minimalism when compared to this celebration of misery and privation.

Great films have been made about people who scrape a living together on the fringes of society. Many use tragedy as a platform for the narrative drive of the film and go to the trouble of creating characters we can care about before expecting us to be involved in their trials. ‘Queen Of Kowloon’ affords viewers no such luxury, content as it is to use the story as a means to fit in as much tribulation for its characters as is possible. After a slow first half an hour the film launches forth an array of depressing twists and the characters gradually fade into the background, replaced soul-less incident. The eponymous player is never allowed to be more than a wearisome martyr who carries the troubles of the world on her shoulders, yet never has her own voice or someone to champion her. Needless to say, 100 minutes of this does not a great drama make.

Hidden within the histrionics of the film, there are good actors and they are occasionally allowed to show their worth. Deanie Ip is competent when she can break free from her character’s troubles while Suki Kwan offers comparative support. This may be scant consolation, but at least it shows there was some measure of skill involved in this film. Unfortunately this still doesn’t amount to a recommendation; ‘Queen Of Kowloon’ is a needlessly miserable drama that prefers wallowing in empty disaster to telling a story we might actually find ourselves involved in.