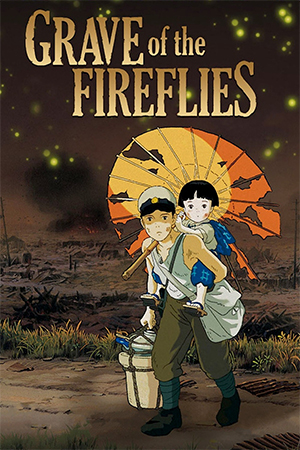 The anime industry is often considered to be a fairly niche market, with most international audiences associating it predominantly with the likes of ‘Dragon Ball Z’ or ‘Naruto’. While the action-oriented series definitely have their place, Studio Ghibli puts out movies that are far more accessible for casual fans.  While films such as ‘Spirited Away’, ‘Princess Mononoke’ and ‘My Neighbour Totoro’ are probably their most well known works, ‘Grave Of The Fireflies’ is rated by many fans as one of their finest.

When their mother is killed in an air raid, Seita and his little sister Setsuko are forced to move in with an aunt as their father is currently away serving with the Navy. Unfortunately for the siblings, this proves to be an extremely unhappy experience as their aunt is a very impatient woman who constantly reminds the duo just what a thorn in her side they are.  Realising that they are unwanted, Seita devises a plan for he and Setsuko to move out on their own using the money left for them by their mother.  However, moving into the barren countryside proves to be trickier than they first anticipated as the really valued commodity is food and with no one to look out for them, the pair soon find the harshness of reality catching up with them.

Although devoid of some of Studio Ghibli’s more obscure character designs, ‘Grave Of The Fireflies’ serves as a fine illustration (no pun intended) of how animation can tell a realistic and dramatic story just as successfully as a live-action movie.  Taking a relatively simple tale of family tragedy, the film accurately depicts the horror of being trapped within a small Japanese village at such a harrowing time whilst simultaneously introducing interesting and easy to warm to characters.  The story also retains a naive innocence that is aided by the use of children in the leading roles but it does this without ever allowing you to stray from the often catastrophic situations that they are forced to endure.  For an animation it’s no mean feat to walk such a fine line between joy and sorrow, and Ghibli is one of the few studios that seems to accomplish this with ease.

The added bonus of ‘Grave Of The Fireflies’ being animated is that it gives the director the freedom to create his world in any manner he sees fit.  With this in mind, the film is not only accurately modelled but also an absolute pleasure to look at.  The human characters retain the appearance seen in prior films such as ‘Spirited Away’, which is definitely a positive as they are always meticulously detailed and packed with enjoyable facial expressions.  However, it is the backgrounds on display here that constantly amaze as they give you a real sense of the countryside whilst adding some more fantastical lighting effects. In particular, the scenes involving the fireflies themselves are amazing and I imagine these would be difficult to reproduce quite so effectively in live action.

It’s easy to dismiss a title like ‘Grave Of The Fireflies’ simply on the basis that’s it’s an animation, but with a tale as heartfelt and competently crafted as this it’s irrelevant exactly what form it takes.  This is a beautifully told story that is wonderfully presented and extremely touching, making it hugely accessible to any audience.