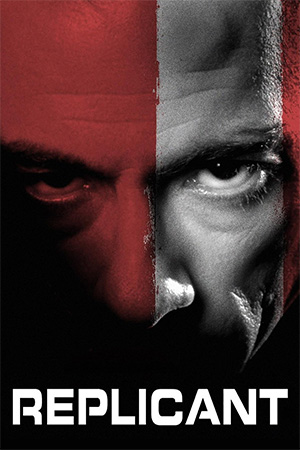 Officer Jake Riley (Rooker) has been on the trail of a sadistic serial killer (Van Damme) for three years without making any progress.  On the day of his retirement he is no closer to cracking the case so decides to bow out with grace, leaving the madman to continue roaming the streets.  However, he is suddenly offered a chance to enter a secret government project which has created a clone of the serial killer using some DNA left near one of the victims.  Working with the replicant, Riley must try to get inside the head of the cold blooded murderer, hoping that his new assistant can put together some of the pieces that surround each of the crime scenes.

Van Damme has been working with a lot of Hong Kong directors of late. ‘Hard Target’ aside, the majority of these outings have really missed the mark but ‘Replicant’ is definitely a step in the right direction. Interestingly, this is primarily because it is not an action-based movie. Instead the film moves away from his standard format (i.e. – jumping spin kick, the splits and gratuitous ass shots) into thriller territory. It’s definitely a big departure for the muscles from Brussels but it is one that proves to be fairly fruitful, mainly thanks to the input of Ringo Lam. Lam opts to keep the film focused on the mystery, making for a very dark and tense ride that is at times surprising. Van Damme also has a good stab at playing dual roles for the second time (see ‘Double Impact’) and even though the characters are intentionally fairly similar, he does enough to make them feel different. Michael Rooker, who is arguably the film’s lead, also helps to keep the film on track with a believable portrayal of a gritty, obsessed cop.

Considering it was the star’s real claim to fame, it’s surprising to see how little toe-to-toe action is involved in ‘Replicant’. However, this is probably wise in relation to the story as this is more about suspense than all out fisticuffs.  The little martial artistry that does appear is still quite nice to look at though, as it isn’t meant to be flashy or intricately choreographed.  Van Damme sensibly sticks to his traditional repertoire of kicks and Lam makes the face-offs feel more exciting thanks to the overall tense atmosphere. There’s also some nice car stunts, with the best being the ambulance chase that engulfs the finale.

‘Replicant’ is a taught action thriller that certainly does nothing to damage Van Damme’s image. Fight fans may be somewhat disappointed by the lack of combat, but there’s certainly enough on offer here to please the casual viewer.