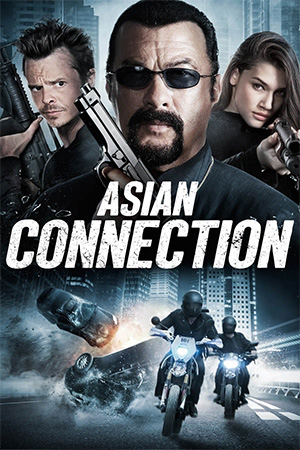 Jack and Sam are a pair of bank robbers operating in Southeast Asia. After they unwittingly steal a drug lord’s money, they find themselves top of the gang’s most wanted list. Unbeknownst to the head honcho however, one of the gang decides to use the situation to his advantage and he blackmails Jack into giving him a cut of the stolen cash. Feeling trapped, Jack has no choice but to turn to the love of his life, Avalon, to assist him in taking down the gang once and for all.

Opening with a comically bad interaction between two rivals, ‘The Asian Connection’ pretty much starts out as it means to go on. The basic plot, which for some reason still feels the need to include narration, is really just about one lowly crook biting off more than he can chew. Sadly, even this simple idea is mishandled and the film fills the majority of its already limited running time with generally unlikeable characters committing bland bank robberies. There is some pointless bickering between our leads, an inane villainous double cross and something resembling a Bonnie and Clyde love story, but it’s all so poorly cobbled together and scripted that it barely warrants any kind of reflection.

Performances from the majority of the cast are equally uninvolving, although it’s somewhat unfair to criticise when the material is quite this bad. John Edward Lee and Pim Bubear are clearly trying their best, but it’s difficult to look back on either of their performances in a positive light. Meanwhile, supporting players like Sahajak Boonthanakit and Byron Gibson should really be better (or at least working on better films) but they too fail to leave a lasting impression. As for the “big star” Steven Seagal, he seems to be completely checked out at this point. The few scenes in which he does feature generally just see him making flirtatious advances towards very young women or quietly scolding lackeys. In fact, I’m still not entirely sure whether these were genuine scenes from the movie or if someone just left the camera rolling during his downtime!

As for the so-called action scenes, these really are the bottom of the barrel. The opening knife fight, which is pretty poor to say the least, is probably the one and only hand-to-hand action “highlight”. Well, that is unless you include one particularly hilarious sequence in which Seagal dispatches of two large MMA fighters by half heartedly sticking out a leg. Meanwhile, Edward Lee doesn’t appear to be a fighter of any kind, or at least he isn’t involved in any scuffles. The only minor confrontation is when he comes up against a high-kicking opponent, played by Dean Alexandrou, but he just winds up shooting him in the back. As for the remainder of the action (of which there really isn’t much), it’s generally just a few low budget shootouts that are neither exciting or particularly fun to watch.

‘The Asian Connection’ is easily one of Seagal’s worst outings to date, as well as being one of the poorest films I’ve seen in some time. Every single aspect is absolutely atrocious and it will leave a rancid stain on the filmography of all involved. Stay well clear.