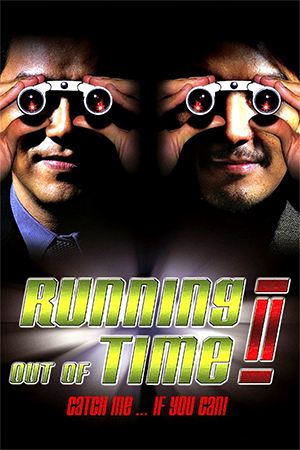 One of the few films of recent years to unite critical opinion and box-office success was Johnnie To’s ‘Running Out Of Time’ Featuring an intriguing plot, an intelligent script and powerhouse performances from Andy Lau and Lau Ching-Wan, the original managed to gain enough recognition around the world to even be lined-up for the Hollywood treatment soon. With all of this in its favour, it only seemed a matter of time before an excuse was made to produce a sequel.

During what seems to be a fairly routine case of a man threatening to jump off a roof, respected police officer Ho – known as Sean in the original – meets a mysterious new challenger. After facing a series of tests in the previous case, Ho now finds his wits put to the test by Ken who manages to use his supposed suicide attempt to announce his appearance on the scene. Ken reveals that he is the man responsible for the theft of Chinese art treasures from a local company and that he will alert the press about the incident if he doesn’t receive the money he demands. This is especially unsettling to the company’s head, Teresa, who realises that, if the truth gets out, it would spell certain doom for their proposed merger. Therefore the race is on to get back the assets before it effects the financially lucrative move. However, Ho once again finds himself faced with an opponent who is one step of the police force and takes delight in the intellectual games that perplex the police.

It was always reasonable to expect that Johnnie To would come under fire from those who enjoyed the original when the sequel went into production; ‘Running Out Of Time’ featured a plot that couldn’t really be repeated as it was reliant on the terminal illness of Andy Lau’s character. Some also prematurely hit out at the casting of Ekin Cheng – an actor who hasn’t always commanded much respect from fans. To the credit of all concerned though, ‘Running Out Of Time 2’ is a constantly diverting caper movie that works well in most areas. On viewing this, it’s important to distance oneself from the original and its unique premise; this therefore means that the film can be appreciated on its own merits. Although some of the tricks used in the original are repeated here, the execution is stylish enough to make them entertaining and a self-referential tone helps this regard. Ekin Cheng has often fallen foul of wooden performances that rely on style far more than substance, but his efforts here are one of the film’s highlights. His display is measured and just as magnetic as Andy Lau’s award-winning showing in the original. It says something for Cheng’s performance when he can hold his own with the great Lau Ching-Wan in their many scenes together. There’s also a few very well directed scenes within the film that give the various actors a fine chance to shine and move the pace of this feature along at an impressive rate.

‘Running Out Of Time 2’ does deserve some of the criticisms it has faced though. Some performances, especially Hui Siu-Hung, are a bit too over-the-top and lend themselves more to farce than the suspense genre. There’s also the now obligatory insertion of computer effects that aren’t really appropriate. For a director of To’s reputation, it shouldn’t be necessary to rely on these needless gimmicks. Importantly though, this is a slickly made thriller that achieves most of the objectives it sets out to accomplish. Taken on its own merits then, ‘Running Out Of Time 2’ is a constantly entertaining film.