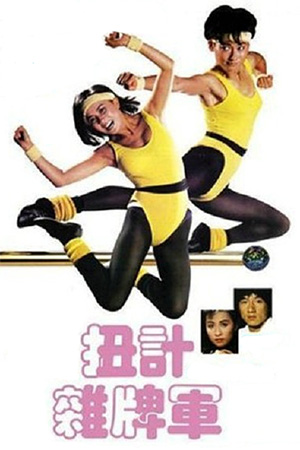 Sheng (Mars), Ma Hui (Phillip Ko), Chiang (Lo Meng) and Piao (Tai Po) are four crooks who were imprisoned for a diamond robbery. On the eve of their release they get into a brawl, and therefore their release is delayed. Sheng’s involvement in the fight was not witnessed by the prison staff however and is allowed to leave the prison on time. When Shing attempts to recover the diamonds he finds that they have been substituted with rocks. When he informs Hui, Chiang and Piao of the news they immediately assume he has taken the loot for himself. Scared, he books a plane ticket to France with the money his childhood friend Chuan (Kara Hui) lends him. But when he tries to board the plane with his new acquaintance Bonnie (Carina Lau), he discovers the ticket is invalid so he attempts to get a refund from Liang (Clarence Fok) who sold the ticket to him in the first place. After seeing Sheng’s wanted poster however, Liang  sells him out to Ma Hui, while Sheng is blissfully unaware that Bonnie is private detective investigating the diamond theft.

‘Naughty Boys’ is hardly a well made film. The narrative is disjointed, and laughable at times. If ever there were a film that was made up on the spot, ‘Naughty Boys’ would be a prime candidate. No time is taken to establish the female characters. It would appear that Carina Lau’s purpose is that of eye candy, and we are subjected to the traditional pervy comedy a la ‘Lucky Stars’, albeit less sophisticated. Kara Hui seems to have two purposes however. The first is to add some credibility to the action sequences in which she succeeds. The second is to be treated badly by Mars. The implication would appear to be that she’s supposed to be unattractive? As for Clarence Fok and Billy Lau, their presence only serves to pad out the running time.

In fact there is only one area in which ‘Naughty Boys’ doesn’t fail, and that is the action scenes. These are very typical of the 80’s choreography that has since been labelled “The Golden Era”. There are some quite hairy stunts that have become the trademark of Mars and Co. These sequences alone are worth the relative suffrage caused by the rest of the film, as they are of a higher standard than those found in Wellson Chin’s overall more enjoyable ‘Inspector Wears Skirts’.

‘Naughty Boys’ should only be viewed for one reason – the action. All other aspects of the film fall flat on their face. A pity, since with a bit of care and attention to the story it could have been a minor gem.