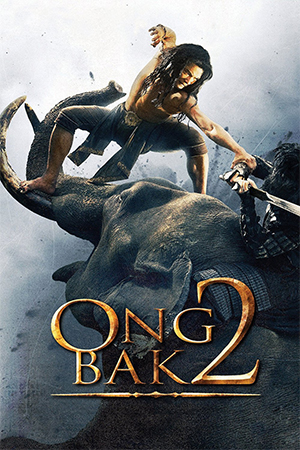 Now, there’s been a lot of talk about ‘Ong bak 2’, from Tony Jaa doing a runner to the general problems with production, but this review is going to concentrate on what the movie is about – a deeply moving, inspirational, gut-wrenching insight into the depths of one’s mind.  YOU’RE KIDDING, RIGHT?  This is a balls and all action fight fest that puts Tony Jaa centre stage, with all-comers from a variety of different martial arts backgrounds helping to make him look good.

Firstly let me point out that this film has nothing to do with the first one; it’s just a cash in on the name, although why they bothered is beyond me as Tony Jaa is the real attraction and the reason why people want to watch this. However, the good news is that they have at least tried to do something a bit interesting rather than finding a stolen elephant!

The story revolves around Tien (Tony Jaa) who is orphaned at a young age when a mysterious cloaked black figure kills his parents. Of course, he isn’t solely responsible and there is an evil warlord behind it all giving the usual bad guy sneer at every opportunity.  Throw in a childhood sweetheart and Tien being saved by a group of pirates (pirates on land, I kid you not) and well that’s about it.  No seriously, that’s it. What did you expect, Shakespeare?

What we have all come to see here is the fight scenes and in this respect you wont be disappointed by ‘Ong Bak 2’. This time around, Tony Jaa not only gets to show his power and grace in the martial arts but also picks up a few weapons along the way (the three sectioned staff being my personal favourite).  On top of this, the film throws in the usual training montage in which he learns the way of the warrior, with Kung Fu, Samurai sword and Ju-Jitsu being just a few of the abundance of styles that are on display.  Jaa also gets to use those physical attributes aplenty with some of the best action scenes you’ll find on film today, with amazing stunts that include a run across several elephant’s backs that he makes look so easy but one fall and he’d have to be scraped off an elephant’s foot.

All in all, ‘Ong Bak 2’ is a mixed bag. You can clearly see that it had a troubled production and the ending is… well, unexpected to say the least. On the bright side, the cinematography is stunning and there’s still no doubt that very few have the on-screen charisma of Tony Jaa. So, I’d say if you love your action then you won’t be disappointed but I still can’t shake the feeling that if Tony hadn’t left the set half way through, things might have been even better. With ‘Ong bak 3’ already in production, let’s hope they learn from their mistakes and take the opportunity to tie up those loose ends.