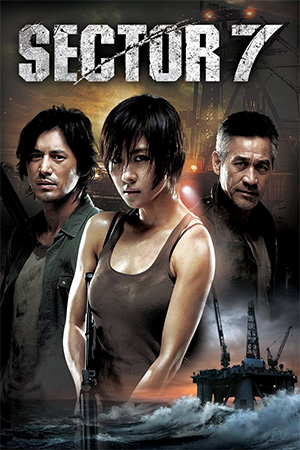 With 3D de rigueur in Hollywood at the moment, it was inevitable that Far East cinema – and the ever commercially confident Korean industry in particular – would fancy a piece of the pie. Having tackled one of the most infamous days in Korean history in his last film, Kim Ji Hoon is given the task of competing with the marauding imports head-on with ‘Sector 7’.

On an offshore rig near Jeju Island, an assorted crew drill into the sea bed in an increasingly futile attempt to discover new oil deposits. Hae Joon (Ha Ji-Won), the daughter of a late oil worker who inspired her to take up the career, is obsessed with finding crude, but finds her apathetic workmates are keen to give up on the whole operation. One final drilling is called for and popular captain Jung Man (Ahn Sung-Ki) is put in charge of his old crew to lead the work. As the work begins, members of the team start to disappear, pointing to the arrival on the rig of something very unpleasant that has been released by the operation.

It’s impossible to talk about ‘Sector 7’ without mentioning the greatly popular ‘The Host’, the creature feature that put Korean monster films on the map. Bong Joon Ho’s classic was fresh, funny, exciting, tense, quietly satirical and full of wonderfully eccentric characters the viewer grew to love – the complete antithesis to the mouldy-brained mish-mash that is ‘Sector 7’. This is Exhibit A in the case against soul-less, three-dimensional, computerised productions that are hiding their shallowness behind technological trickery.

It’s easy to sound like a febrile Luddite when discussing 3D films. Though this innovation should open cinematic possibilities it often seems to be the latest bit of smoke and mirrors designed to distract viewers from huge deficiencies. ‘Sector 7’ hopes that once you put on your glasses, your need for a well-written action film with characters to care about and genuine tension will disappear – we’ll just be so impressed by and grateful for what we’re seeing that such trifles wont bother us. Yet the one constant that audiences have responded to from the very genesis of narrative cinema to the present is an emotional reaction to what they are seeing and ‘Sector 7’ is too lazy to try and stir this.

Obviously production values are slick and the cast filled with popular Korean stars, but its computer effects are flawed, proving that even the technological execution here is below-par; a few of the scenes viewed in 3D look woefully back-projected and shots of the monster on the rampage are surprisingly poor. The characters tend to be the flat clichés that often people these genre movies, especially Ha Ji-Won’s rough, tough, Ripley-lite.

Watching in 3D ensures that there are a few moments of effective diversion, a handful of shots where some ephemera floats off the screen to enraptured wows. Yet, as is sadly the case with many of the current crop of 3D films, ‘Sector 7’ is another cinematic Potemkin village.