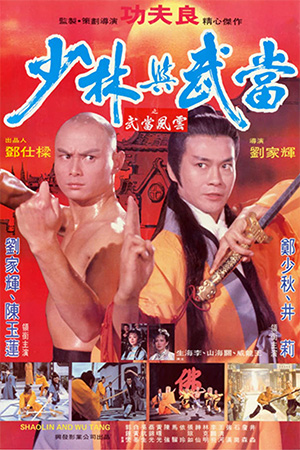 Despite being from the rival schools of Shaolin and Wu Tang, Chun and Fung are two best friends who rarely dispute whose skills are the best: the former’s Shaolin fist or the latter’s Wu Tang sword. This innocent camaraderie is challenged when a Ching prince contrives a way to pit the two against each other in an elaborate scheme to learn both skills. His first action is to imprison Fung until he gives up the Wu Tang manual, and when this fails he fashions a way of destroying the delicate truce between the schools. Eventually, as they represent both of their respective schools, Chun and Fung are charged with a fight to the death – but can they uncover the plot before it brings this inevitable bloodshed?

‘Shaolin and Wu Tang’ was screen legend Gordan Liu’s second film as director (though it’s sometimes claimed that Liu Chia-Liang was behind the lens) and treads familiar material to his Shaw Brothers days. In fact, there’s definitely a bit of deja-vu here, especially later in the film during the training sequences; I was getting very strong 36th Chamber vibes from it. Yet, as they say, if you steal, steal from the best and you cannot really blame the director for plundering his most famous film as a star for inspiration. And while ‘Shaolin and Wu Tang’ isn’t a ‘36th Chamber of Shaolin’ beater, it’s a very decent genre piece.

The film starts with a bang; the opening sequence is an absolute belter and, you feel that even if the rest turns out to be a major disappointment, those five minutes were worth it. Thankfully, although it struggles to keep up the pace, there’s plenty still to enjoy in ‘Shaolin and Wu Tang’. It does take another thirty minutes for the storyline to stick, but once it gets a rhythm in place, it remains quite consistent. Even through the slower moments, the appealing cast help hold the attention and ease things before the next big action sequence.

There are some plot holes that become apparent as the film continues, but good quality action and a fine cast cover a multitude of sins. And in the former category, there is much for genre fans to love, things building nicely to a beautifully choreographed finale. There’s also the nice message about co-operation rather than division that becomes apparent, even giving the denouement a twist that’s quite refreshing. Recommended.