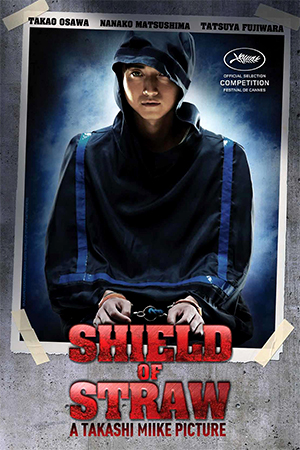 Takeshi Miike – the ultimate ‘Marmite’ director – helms this adaptation of Kazuhiro Kiuchi’s novel and proves once again that his body of work is impressively eclectic.

Kiyomaru (Tatsuya Fujiwara), a notorious sociopath, is released from prison and shortly afterwards a 7 year old girl is found dead – the whole of Japan is under no illusions as to who is responsible. The victim is no ordinary little girl though and her terminally-ill, billionaire grandfather takes out adverts in all of the main newspapers offering a sizeable bounty for anyone who kills Kiyomaru. Without anyone to trust, the murderer hands himself into the authorities and is due to stand trial in Tokyo, but getting him across the country when even the law enforcers can’t be trusted is a fearsome task. Five police officers are given the task of dragging the slimy killer through Japan using any form of transport that they can find.

With a premise slightly reminiscent of the second (better) half of ‘S.W.A.T’, Takeshi Miike’s ‘Shield of Straw’ is a tense, thoughtful thriller that asks awkward questions of its audience. Far different in tone from the Colin Farrell hit, this is a film that contemplates the morality of absolute justice, the avarice of some and the self-justification of others. For the most part it succeeds in retaining a tight grip on the viewer’s attention.

‘Shield of Straw’ is never about whether Kiyomaru is the murderer or not. It is about the responsibility of the law to protect even the most reprehensible individuals despite their actions. The film is full of conflicted characters who are either reluctantly acting as his escort – despite the knowledge that he is a truly vile creature – or keen to claim the bounty: Miike’s drama asks whether it is more admirable to take the life of a killer for simple vengeance rather than for the lure of billions of yen. In this regard it accomplishes its goals and in so doing is afforded a genuine sense of not knowing what will happen next.

The quicksilver pace set up in the first of the film does taper away very slightly as the motivations of each character comes to light and there is only a finite time that the dynamic of catch-release-catch can work fully. Nevertheless, for a director known for lurid excess, ‘Shield of Straw’ is a subtly haunting thriller with an ending that asks questions of everything that went before it.