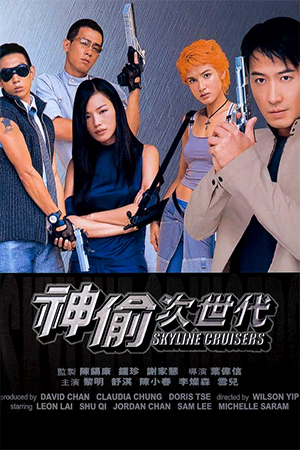 One of the unusual aspects of Hong Kong cinema is how directors move from one project to another totally different project. Johnnie To is a prime example of this, moving from arthouse thrillers like ‘The Mission’ to enjoyable commercial hits like ‘Help’ and ‘Needing You’ with great success. Wilson Yip tries his hand at the same idea with ‘Skyline Cruisers’ – a film that was released a mere six or seven months after the excellent ‘Juliet In Love’. Both projects are very different with ‘Juliet In Love’ offering a thoughtful and touching essay on love and ‘Skyline Cruisers’ attempting to be a Hong Kong ‘Mission: Impossible’.

In the world of high-class theft, Mac (Lai) and his team of superthieves are untouchable and the film opens with their stealthy operation on an Australian financial business. With their fame widely spread across the world of espionage and surveillance, the team find their services in high demand. Their next big mission is the recovery of a Cancer-cure drug which has been stolen from its developer by a greedy rival. This mission calls on the thieves to negotiate the usual high-tech security systems and evade the numerous guards that are roaming the complex. However, although the operation moves along without too many hitches, the team discover that the highly sought after drug and formula are not in the complex and the whole exercise is a rather risky waste of their time. The real reasons become clear when Mac meets a mysterious woman who is also looking for the drug and promises to help him answer the questions he’s facing. One of the answers involves Soto, an old rival of Mac and a fellow superthief – but still many questions are left unanswered.

Many have wrongly assumed that ‘Skyline Cruisers’ is a sequel to Teddy Chen’s popular high-tech action film ‘Downtown Torpedoes’. Although that isn’t the case, the comparisons between the two are fairly obvious and in style it could be perceived as a virtual remake of Chen’s film. Unfortunately the weaknesses that befell ‘Downtown Torpedoes’ are even more apparent in this less entertaining work; the plot ties itself in too many knots without fully explaining any of them and the characters are less developed than there is any excuse for. ‘Skyline Cruisers’ though suffers in far more unexpected ways, namely action and direction – two aspects one assumed would be well looked after. Every time the action threatens to really explode into adrenalin-based excitement, Yip’s strangely pedestrian directing slows it back down again and therefore the film never truly ignites. If this wasn’t enough of an error in an action film it is then combined with uninspiring editing which merely confuses when it should clarify. Yip also allows a rather self-conscious style to take over the narrative which was something he slipped into with the ending of the otherwise enjoyable ‘Bullets Over Summer’.

‘Skyline Cruisers’ is certainly not all bad though and these criticisms are not an indication of a totally wasted production. Any film with Sam Lee and Jordan Chan in is always worth at least considering and even the not especially magnetic Leon Lai offers some degree of entertainment. The opening does promise a fun and breezy film before it gets bogged down in confusion, but there are moments that keep the viewer watching. Still, it is certainly more absorbing than the dreadfully self-important ‘Mission: Impossible 2’. However, those hoping to sample a classic example of Hong Kong action film-making will be best advised looking in another direction.