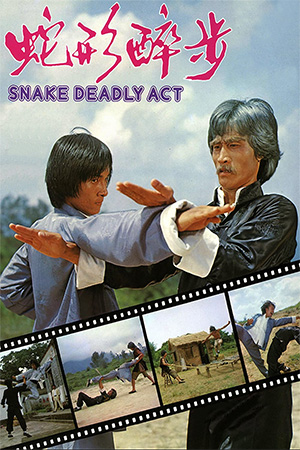 Kwok (Ng Kwan-Lung) prides himself on his upright character and his desire to fight against any villains in the town. However, Kwok is simply not good enough to live up to his beliefs and finds himself beaten regularly by those he encounters. During one such encounter, the young pretender is saved from a severe bruising by an expert Snake Fist fighter (Fung Hak-On) who then appears a second time during a fight with a casino boss (Michael Chan). After saving him again, Kwok begs the stranger to accept him as a student and teach him this deadly style. Agreeing to the request, the master takes this new charge under his wing and slowly turns him into an expert fighter. With his faith now fully centred on his master, Kwok is told a shocking secret about his father. Added to this is the discovery that his master is far from righteous too and both men are in fact very familiar to one another. In a final showdown, the Snake Fist expert faces his student’s father with the confused Kwok stuck in the middle.

There’s ways to make the usual master/student storyline interesting and even refreshing. Sammo Hung’s masterpiece ‘Prodigal Son’ and classics like ‘Drunken Master’, ‘Magnificent Butcher’ and ‘Knockabout’ all succeed in achieving this. Sadly, ‘Snake Deadly Act’ is too prosaic to escape its over-familiar plot; director Wilson Tong films the proceedings in a way that is easy to telegraph, but also lacking in energy. Therefore, every cliched scene lacks a real spark and is instead welded together mechanically.  It’s also significant that Ng Kwan-Lung – a real kung fu master – lacks the charisma and presence of Jackie, Sammo or Biao. These bad points do not make ‘Snake Deadly Act’ a complete waste of time though; with an accomplished cast of this nature on hand, it would be almost impossible not to make something that is at least entertaining. Whereas Ng Kwan-Lung struggles with his acting range, he is an accomplished martial artist who looks powerful in the film’s later fights. There’s also a few enjoyable performances by some of the genre’s best loved faces; even in a mere cameo, Angela Mao is assured, showing all of her years of screen experience.

‘Snake Deadly Act’ is a typical example of a good, but not great independent kung fu flick. The end twists that open up a world of possibilities are very poorly handled and the opportunities to develop the characters are never taken. This means that ‘Snake Deadly Act’ never achieves what it could so easily have done.