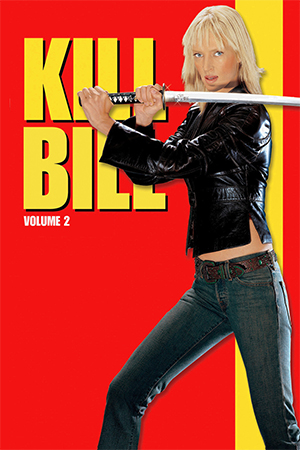 When Quentin Tarantino announced he would make a Kung Fu revenge epic in excess of three hours, Miramax were unimpressed. A compromise was reached that it would be released in two parts making it much more commercially appealing to the studio. ‘Kill Bill: Volume 1’ came as a disappointment to many Tarantino fans, owing to a lack of character depth and poor dialogue. It certainly seemed a far cry from his previous works ‘Reservoir Dogs’, ‘Pulp Fiction’ and the underrated ‘Jackie Brown’. ‘Kill Bill: Volume 2’ is the continuation of the overrated ‘Kill Bill: Volume 1’ in which Beatrix Kiddo (Uma Thurman) exacts her revenge on the remaining targets on her hit list. Drawing inspiration more from the Sergio Leone Spaghetti Westerns as opposed to the Japanese chanbara films, and a return to his trademark style, it promised to be a return to a more tried and tested ground that he had tread so very well before.

‘Kill Bill: Volume 2’ was referred to by Tarantino himself as the part which would flesh out all the characters. For the most part this is true. Especially in the case of Bill (David Carradine). A lot of effort has been put into making his character despicable while at the same time strangely likeable. However as the story is followed from the point of view of Beatrix Kiddo, it could be argued that the characterisation for this character is paramount. Here arises a problem. While in volume 1 the audience roots for her being the wronged party. However, through the frequent flashbacks it becomes evident that her character lacks any real personality. This may have been a brave conscious decision on Tarantino’s part, but ultimately it serves to become the films undoing. This results in having a lead protagonist which we no longer care about, taking revenge on a character who despite all his wrongdoings (lest us not forget that Beatrix herself is a cold blooded killer), has a personality, is eloquent and boasts charisma, making him much more interesting. As a result the ending becomes an anti-climax emotionally. Tarantino attempts to entice the audience into empathising with her in the closing moments but there is no empathy to be had.

Not only is the ending an emotional anti-climax, it also fails to deliver a fitting action set piece. Originally there was supposed to be a swordfight on the beach under the moonlight, but when filming over ran Harvey Weinstein insisted for it to be cut back. What now remains is barely 15 seconds of uninspired choreography and a brief dialogue reference to the duel that was originally scripted.

Tarantino tries to re-instate his trademark snappy dialogue which was woefully absent from volume 1. The result is a mixed bag. At it’s worst it is weak and self-indulgent, but even at it’s best it doesn’t even compare to the dialogue present in ‘Reservoir Dogs’, ‘Pulp Fiction’, ‘Jackie Brown’, ‘True Romance’ or ‘From Dusk Till Dawn’, all of which Tarantino boasts writing credits for.

The stand out sequence in volume 2 has to be the flashback with Pai Mei (Liu Chia Hui). Fans of the Shaw Brothers classics will be familiar with Lo Lieh’s representation of the same character in ‘Executioners From Shaolin’ and ‘Fists of the White Lotus’, the latter of which Liu Chia Hui played the lead. It is fitting then that in his more distinguished years he should play the same character he fought in ‘Fists of the White Lotus’, more that twenty years later. It is quite a show stealing performance as Liu does a fine job playing the larger than life character of Pai Mei. There is a downside to this sequence however and that is the presence of Uma Thurman. Liu is very restrained in the fight the two characters engage in. Despite this Uma still looks unconvincing as a martial artist affecting the credibility of the sequence in question. This is no fault of Uma’s as she is clearly the wrong choice for an on screen martial artist in spite of her best efforts. But having said that it would be difficult to find a western actress who could pull it off convincingly.

Over the course of volume 1 and 2, I can’t help but find Uma Thurman’s performance somewhat lacking. This could of course be partially down to the poor dialogue she is faced with but David Carradine on the other hand is sublime as Bill. Samuel L. Jackson has a small almost non-existent cameo but even for those few moments he owns the screen. A mention must also go to the excellent performances from Bo Svenson, Larry Bishop and last, but by no means least, Michael Parks.

This is the first film from Tarantino to feature an original music score courtesy of Robert Rodriguez. And a fine score it is too, which complements the Ennio Morricone score with which it is juxtaposed.

‘Kill Bill: Volume 1’ was inferior to all three of Tarantino’s previous directorial efforts. However it was still a pretty entertaining revenge flick. ‘Kill Bill: Volume 2’ on the other hand came across as fairly gratuitous. It probably would have been best to add a proper ending to volume 1 as much of volume 2 was unnecessary.