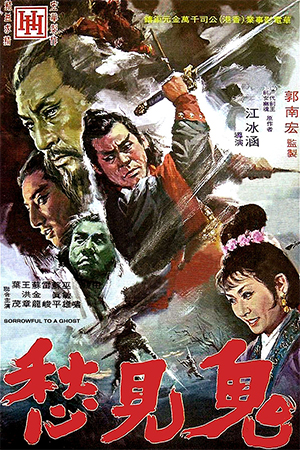 Having glanced at the enticing cover which depicts exhilarating sword fights and hard-wearing heroes, I had high hopes for ‘Sorrowful To A Ghost’. Sadly though, I was quickly to proven very, very wrong.

The Patience School are a peaceful martial arts clan who focus on the teachings of tolerance. They have always been renowned for avoiding trouble but now trouble is about to come looking for them!  When one of their more reckless students, Kwan Chuen, kills a fellow student in self defence, he lands the school in extremely hot water. The dead boy turns out to be the son of the Dare Devil, a ruthless killer who likes nothing more than an excuse to wreak havoc.  Several deaths later and Kwan is now one of the few left alive so he goes into hiding to practice martial arts. Will Kwan be able to mount a serious challenge against Dare Devil or will he wind up like the rest of his classmates?

‘Sorrowful To A Ghost’ is another typical Shaw Brothers clone from director Joseph Kuo. As is often the case with Kuo’s films though, it lacks both the creativity and class of its inspirations and actually winds up being pretty darn boring. The whole martial arts school rivalry plot is tired and tedious, and the film’s assembled cast of nobodies struggle to work with the very limited material. As for the fights scenes, they are perhaps the worst element of all. Picture the most blandly put together sword fights possible and then place them on fast forward, and then you’ll have some idea of what to expect from ‘Sorrowful To A Ghost’. Oh, and also leave that fast forward button running while the combatants are walking around because that won’t look stupid… will it?

Unless you find poorly made kung fu movies a source of amusement then I would seriously suggest you steer well clear of ‘Sorrowful To A Ghost’.  This is a bad film with no apparent reason to watch and it is truly worthy of the one star rating.