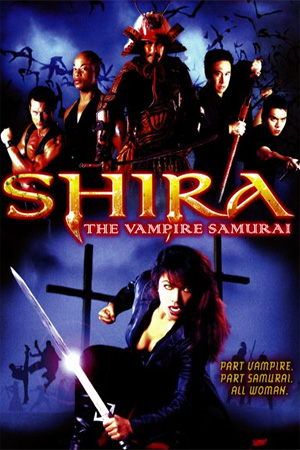 In ancient Japan, Shira (Jason) and her husband are attacked by a group of ninja vampires. Her husband is killed but she survives the attack but is left as a vampire. She is nursed back to health by a kindly samurai who also teaches her the art of fighting. Cut to present day America and Shira has discovered the killer of her husband’s whereabouts. She seeks out the man responsible, Kristoff, but discovers he has been looking for her. Kristoff needs to impregnate Shira to create a race of ‘daywalking’ vampires that he will be the ruler of.

This is a low, low budget film that has the look of a really, really cheap TV series. The sets are no better than you would expect to see in a bad porno movie and the lighting is terrible.  Sometimes it’s too dark, sometimes it’s far too bright but it’s always incredibly flat and boring. The direction is sloppy and was seemingly done by someone who has no idea how to compose a shot. The direction of the action scenes is no better, in fact, it’s probably worse. Poor angles combined with bad editing produce some incoherent, uninvolving and desperately dull fight scenes. Not one of the actors shows any real fighting ability worth mentioning. On many occasions during the film, characters describe Shira’s fighting skills as ‘amazing’ but I didn’t see anything to suggest she is even a mildly competent martial artist.

The acting is also uniformly bad. Chona Jason brings no depth, charisma or heart to her role and left me not even remotely bothered about her situation or whether she lived or died. The actor who plays her boyfriend deserves a special mention. He is so wooden that his part could’ve easily been played by a wardrobe from IKEA. An idiotic, muddled, cliché ridden script doesn’t help matters but I don’t think a screenplay written by the combined talents of Harold Pinter, William Shakespeare and Ernie Wise could’ve saved this turkey.

This is an amateurish waste of time that I urge you to never, ever see. (Note To Self: This is what happens when you buy a DVD solely based on the title)