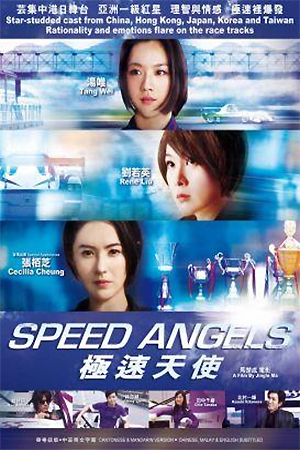 Top racing driver Han Bing (Liu) is devastated to find her fiancé cheating on her on the eve of their wedding. What further complicates the matter is that the woman he has been seeing is her best friend and fellow racer You Mei (Cheung) who announces that they have been in love for months. Han loses herself in drinking and her career falls apart with her place on the all-female ‘Speed Angels’ team taken away. A year later Han is offered a shot at a comeback with ‘Speed Angels’ and asked to take raw talent Hong (Tang Wei) under her tutelage. Although their experiences are worlds apart, both women find that they have personal demons to vanquish before the big ‘Heroine Race’. And things are further complicated when You Mei is presented as the new driver of the rival Sakura team – run by Han Bing’s ex.

Jingle Ma’s efforts tend to favour slick style over any kind of meaningful substance, but within that there is often room for a certain degree of charm; the recent ‘Love You You’ was disarming and of course a joy to look at while never threatening to be a cinematic revolution. There should always be a place for well constructed commercial fodder, an outlet for gentle escapism. ‘Speed Angels’, unfortunately, shows how thin the line can be between the aforementioned and uninspiring filming-by-numbers. It’s hard to believe that anyone could be too impressed with the way this one turned out.

Much of the problem with ‘Speed Angels’ is its apparent contentment with clichés and a dogged determination to be utterly mundane.  The melodramatic plot twists are all too predictable as are the over familiar characters who populate this world; you get the raw recruit, the tortured veteran drowning their sorrows in drink, best friends turned rivals, snarling villain not averse to using dirty tactics…all present and unmodified. The only difference with ‘Speed Angels’ is that the protagonists are women and therefore packed with even more unnecessary emotional baggage by the writers.

‘Speed Angels’ doesn’t even have the virtue of exciting race footage to fall back on. The track action – what there is of it – is sloppily edited and over-reliant on computer effects. This dissipates whatever scant excitement there could be and means that it’s unlikely to please even the niche that likes to see pretty Asian actresses driving fast cars.