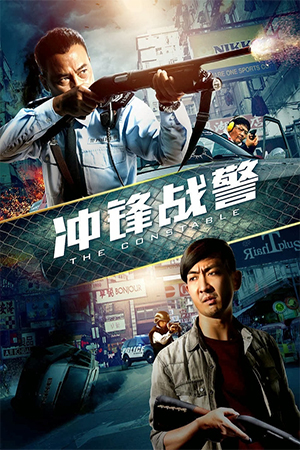 Lam Kwok Kuen (Yam) is a hard-working veteran officer with the vehicle department, a job that still sees him face the more unseemly side of Hong Kong. After saving a young woman from potential harm, Lam finds his understated heroism achieving recognition. Firstly there is the young cadet nicknamed ‘Sissy’ who looks up to him as an inspirational figure; then there is his mentally-disabled son who is reliant on him; then there is the woman who he had earlier saved now working as a carer for his ten year-old, but with developing a crush for Lam himself.

Although the poster for ‘The Constable’ implies some kind of all-action police thriller, ‘The Constable’ is more of a drama with occasional spurts of tense gunplay. And yet, it is no worse off because of this: it benefits greatly from its focus on the mundane and the everyday, the challenges that affect police officers everyday. Hong Kong cinema has had its share of bullet-blazing action and so this movement into something more understated is quite welcome. Obviously Dennis Law’s relatively tight budget may have forced his hand on this, but it gives ‘The Constable’ a bit of an interesting edge.

The great strength of Law’s film is Simon Yam, an actor who has a quiet authority in the role of policeman and single-father. His character is something of a cliché for the genre, but with Yam’s skill it is a persona infused with humanity and it is hard not to be sympathetic to his daily grind. The supporting cast are capable too with Lam Suet getting a welcome role as a fellow cop – his character is given more depth than the usual triad thug or whimpering stool pigeon he is landed with. Of course, the film also benefits from its Hong Kong/Shenzhen locations; Asian cinema has recently taken its cues from Hollywood, presenting their cities as glittering, neon-bleeding glamour centres – ‘The Constable’ shows the gritty nooks that have a touch of authenticity.

Occasionally Law’s direction hinders the film’s progress. The sub-plot featuring the feckless Sam Lee character is hard to care about and is inserted as more of a way of ensuring a proper shootout at the end. A bit of action at the end is usually welcome, but when it’s shoe-horned in so awkwardly it tends to be a little jarring. Thankfully this low-budget Hong Kong drama has enough going for it to sidestep its lazier moments – it certainly makes a change from opulent Asian action films keen to impress an international audience while losing their soul.