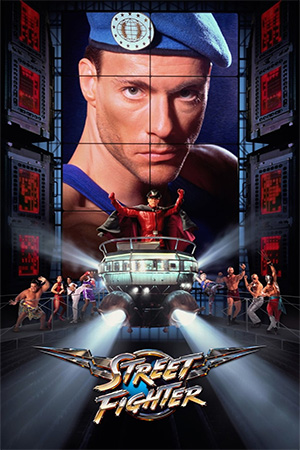 As my free time is still predominantly occupied by playing ‘Street Fighter IV’, I decided to resume my analysis of the franchises’ movie counterparts. After a week of intense mental preparation, I finally plucked up the courage to dig out this little live-action gem, which is often accused of being responsible for the death of Jean-Claude Van Damme’s career.

Following months of military manoeuvres, General M. Bison (Julia) has captured a handful of Allied Nations relief workers who he intends to use as leverage. In exchange for their safe return, he must receive a huge ransom within three days or he will put them all to death. Unfortunately for Bison, amongst their number is Carlos “Charlie” Blanka who happens to be the best friend of U.N military commanding officer Colonel William F. Guile (Van Damme). This makes it a personal vendetta for Guile and with the help of low-life martial artists Ryu and Ken, he attempts to infiltrate Bison’s operation. However, Guile soon discovers that he is not alone in his quest as he encounters numerous fighters who have been wronged by Bison and all are seeking their own kind of justice.

If you are ever going to make a film based around an extremely popular franchise, then surely rule number 1 is always going to be “stick to the existing story”. Well, apparently no one bothered to tell to Steven E. de Souza and it is here that ‘Street Fighter’ begins its decent into celluloid hell.  Forget all of the established mythologies from the game or even just the basic premise that it centres around a fighting tournament, ‘Street Fighter’ throws all of these ideas out of the window in favour of… (drum roll please)… a super villain intent on world domination. Considering the hundreds of possible ideas that could of been taken from the game, it’s inexcusable that Mr. De Souza would settle for such an age old concept.  And as if this wasn’t insulting enough, the film is absolutely overflowing with diabolical dialogue which throws out classic lines such as, “I’m going to kick that son of a bitch Bison’s ass so hard that the next Bison wannabe is gonna feel it!”.  Clearly someone in quality control was asleep on the day that this sorry excuse for a script was passed through their orifices (no, that wasn’t a typo!).

So, with a story that leaves a lot to be desired you would think that the next logical step would be to hire a handful of quality actors to cover up your mistakes. Well let’s see, the main character is Guile and he’s the poster boy for the “American” military and an all-round “American” hero, so who on earth could you get to play him? Of course, a Belgian! Wow, I understand that Van Damme was riding high and perceived as a cash cow at the time, but surely the dollar signs couldn’t have covered up this horrendous mis-cast? Even putting aside his nationality, he doesn’t look remotely like Guile and dying his hair a gingery colour doesn’t help at all!  Similarly if you look anywhere else in the cast roster there’s a problem – Raul Julia can act but he doesn’t look healthy/strong enough to fight, Ryu and Ken come across as frat boys rather than kung fu masters, E. Honda is clearly Hawaiian rather than Japanese, Blanka looks like the Incredible Hulk’s deformed twin etc etc! I could go on forever but sufficed to say there are numerous problems here and the majority of actors couldn’t act their way out of a paper bag.

Never fear though because the whole movie is centred around fighters so it’s bound to be filled with some top notch action, right? Wrong! In fact, when the credits rolled I sat there scratching my head as I tried to remember a single bout that took place prior to the finale. The reason for this is that the majority of the so-called fights are just one hit and then some inane interruption occurs to end it all. This seems ludicrous considering the source material and with Van Damme’s involvement, you would have expected to see at least one notable bout. As for the finale, this is also a huge disappointment as Van Damme goes through his repertoire of three kicks whilst the other fighters do nothing more than throw the odd punch (special moves are never seen). This is further hampered by ridiculous editing that cuts away to a different fight every few seconds, reducing the excitement and completely confusing the viewer.

As if the above didn’t spell it out clearly enough, this is a crapfest of epic proportions that should be avoided at all costs. It is a stain on the ‘Street Fighter’ name and I would be extremely surprised if any of the people responsible had even heard of the game prior to making the film. The only real value it holds is as a comedic oddity to be pulled out on drunken nights with your mates just so they can see what evil truly lurks in the minds of Hollywood writers.