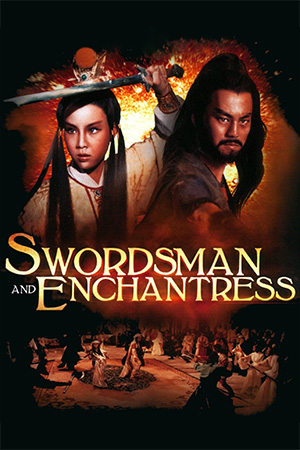 It’s always difficult to review a film based on Gu Long’s novels due to the fact that I have never read one of them. It is therefore a challenge to know who to blame for an inadequacies in the film – is it Chor Yuen’s direction or are some of the novels themselves inherently convoluted. While many of Chor Yuen’s screen adaptations of the writer’s work have proved to be reasonably successful and certainly entertaining, ‘Swordsman And Enchantress’ never retained my interest despite the usual weird and wonderful characters.

As one expects from Gu Long, the storyline focuses on the search by a number of martial clans to find a fabled object. Here, the ‘Deer Sword’ is the said article – a blade infamous for its sublime craftsmanship and power. While the colourful clans track down the sword, a young woman called ‘Little Lord’ (once again an attractive woman masquerading as an unconvincing man) is causing mayhem with her ambitions. ‘Little Lord’ attacks the clan of Lian and, when her initial plan is put into action, decides to kidnap his wife. Though she easily beats the guardians assigned to Lian’s wife, ‘Little Lord’s plan is foiled by brave wanderer Xiao (Lung) who then takes Mrs. Lian to safety. Xiao, though, is framed for kidnapping and every clan is sent after him. Matters take a turn for the worse when he also begins to develop feelings for Mrs. Lian – much to the fury of her husband.

To spend time explaining the plot in too much detail and therefore find oneself getting bogged down in the expected twists is, as usual, pointless: most of the enjoyment from these kind of films is to sit back and absorb the complexities in your own time. Nevertheless, while I normally find myself quite happy to suspend disbelief for a Gu Long/Chor Yuen collaboration, ‘Swordsman And Enchantress’ is a real test of my patience. The double-crosses are initially interesting, but the frequency of them – alongside the annoying trend of fights starting out of simple misunderstandings – means that this is certainly a lesser production.

The saving grace of the film is again the fine eye for detail that Chor Yuen exhibits. Even his lesser works boast above-average set-design and an eye for the composition of the frame that always helped him stand out from his contemporaries. While some may be alienated by the gloriously colourful, yet studio-bound sets, it is their striking beauty that has often drawn me to even the most convoluted of Chor Yuen’s efforts. That refinement offers some compensation for a film that is maddening and doesn’t have the option of superior fight action to fall back on. Importantly, the sumptuous world that Chor Yuen creates can only offer a certain amount of relief from the fact that the substance of the film is severely lacking.

‘Swordsman And Enchantress’ has more weaknesses than it can cope with, but there is one twist that really left my mouth agasp for its sheer incredulity. Without giving too much away, the ‘Toy Land’ that the hero encounters later on in the duration sets up one of the most bizarre villainous schemes ever conceived. Making an ‘Austin Powers’ film look tame in comparison, the twist reminded me of why many newcomers to Hong Kong cinema are reluctant to watch a swordplay film. Whether writer or director are to blame for moments like this is debatable; what isn’t debatable is that this production doesn’t offer many reasons to purchase the DVD.