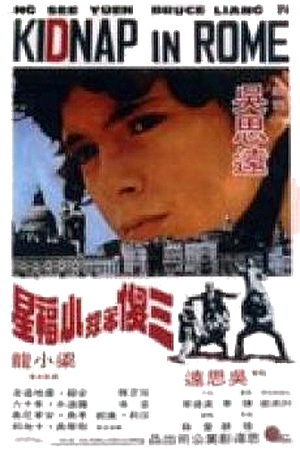 In a typically brave move, Ng See-Yuen relocates the typical Hong Kong conventions to Rome – a city well used by Bruce Lee in the classic ‘Way Of The Dragon’. Alongside ‘Kidnap In Rome’, he also made the risible ‘Kung Fu Executioner’ in the majestic city, though thankfully this is a slightly better effort by the innovative producer/director.

After the son of a wealthy family is kidnapped by a group of ruthless criminals, an Italian policeman and his two assistants desperately try to solve the crime. Foiled more than once, the trio decide to enlist the help of the superkicking waiter (Leung) of the local Chinese restaurant and his young colleague (Hoi). Although this new team is initially unsuccessful, it isn’t long before they begin to track down the kidnappers – owing more than a little to the boot of the extraordinary waiter.

As was said, ‘Kidnap In Rome’ is certainly a cut above the truly wretched ‘Kung Fu Executioner’ – this film actually has a plot (after a fashion). Nonetheless, to commend it in this way isn’t actually saying much for, while this is a more accomplished film, it still screams ‘b-movie’ to the viewer. The Roman locations are gorgeous and are without a doubt one of the production’s biggest assets; even in a below-average film like this, it’s impossible for such a wondrous city not to breathe its charm into the proceedings. Added to this is the fine combination of Bruce Leung’s sublime bootwork and some outstanding nunchuka work from Mang Hoi; with the pair dishing out action of this calibre, it’s hard not to be impressed by this department of Ng See-Yuen’s work. Unfortunately, ‘Kidnap In Rome’ is far too preoccupied with the activities of the bumbling Italian trio who ‘aid’ Bruce Leung. Their ‘comedic’ routine consists of the lowest form of pratfalls and buffoonery, something that only hinders a running time that quickly drags. In short, appalling comedy, superior action.