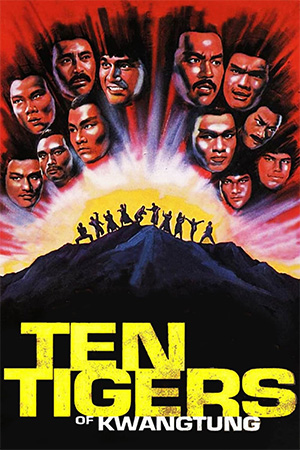 As can be seen from the names above, Chang Cheh’s ‘Ten Tigers Of Kwantung’ manages to group together some of the biggest names in Shaw Brothers’ history. Shaws’ idol Ti Lung is grouped together with the Venoms, the wildly popular Fu Sheng, veteran Jade Screen actor Ku Feng and a whole host of Chang Cheh’s supporting players. With a quite astonishing cast and a director with such a good pedigree at the helm, it was always certain that this would be watchable at the very least.

Two strangers arrive in Kwangtung (Canton) with a sinister mission to complete. Targetting three local fighters, the ominous pair manage to isolate one of the number and kill him. The remaining members of the group deduce the meaning of the attack; the answers are traced back to events that took place years before. These events concern the forming of the famous Ten Tigers of Kwangtung who prided themselves on their righteous stand against the heinous Ching authorities. At their beginning, the team consists of one loyal fighter (Ti Lung), his hot-headed sibling (Fu Sheng) and two Shaolin trained brothers (Wei Pei, Dick Wei). The first challenge for this fledgling band is to protect an anti-Ching agent (Ku Feng) who needs safe passage out of Kwangtung. To this end, more loyal fighters are enlisted for this task including a master who works at the harbour (Lu Feng) and a skilled kicker (Sun Chien). However, those who claim allegiance to the Ching are aware of the rebellious activities and fiendishly trick a quartet of kung-fu experts to serve the government’s purposes. Eventually the two forces meet for an extended clash where the truth is revealed to those who have been deceived and the focus turns to the injustice of the rulers. Thus the ‘Ten Tigers Of Kwantung’ are formed. However, now the descendants must fight against a Ching avenger who is intent on slowly destroying the fabled Ten Tigers clan.

Newcomers to Chang Cheh may find the structure and delivery of ‘Ten Tigers Of Kwantung’ to be a little confusing; using multiple flashbacks, the film has been accused of this by a number of critics. While this can be the case to a certain extent, with full concentration the storyline becomes absorbing rather than baffling; it’s important to pay close attention though as the sheer volume of characters is immense. The amount of characters is perhaps the major weakness overall as none of them are given enough time to develop, the relatively short running time increasing this effect. Nonetheless fans of Shaw Brothers’ productions will undoubtedly want to watch this once-in-a-lifetime cast in action with a large portion of the period’s great performers given plenty of chance to shine. Standing out from this illustrious company are Ti Lung (as the honourable leader), Fu Sheng and Kuo Chui who takes the role of Beggar So. It’s also pleasant to watch Lu Feng, in one of his few heroic roles, relishing his membership of the wondrous Tigers. The fight scenes, while good, are perhaps the most disappointing part of the film. It’s true that they are exciting and well-designed, but many take place on the slightest pretext. Chang Cheh always managed to draw fight scenes out of real situations, but here they often result from the arrogance of the heroes. The final word is that this is highly recommended for the teaming of fifteen or so of the top stars of the Shaw Brothers era. As a stand-alone production though, ‘Ten Tigers Of Kwantung’ is not Chang Cheh’s best.