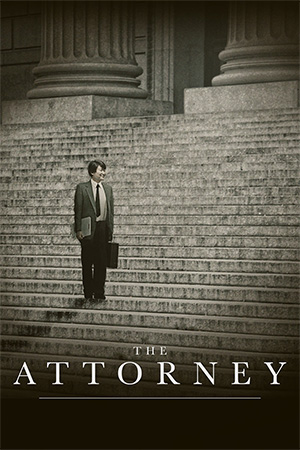 Busan lawyer Song Woo-Seok carves out a lucrative niche for himself by specialising in tax law. His modest practice becomes very successful and he can finally provide his family with the lifestyle he dreamt of when he was an impoverished student. South Korea in the late 70s and early 80s is a country enjoying a significant economic boom – something Song is riding for all its worth – but is also under a nation dominated by a totalitarian government, a fact that the doesn’t initially mean anything to the focused lawyer.

Song’s life of ease is under threat when he very reluctantly represents a young student who is accused of holding anti-government classes. The lawyer only takes the case due to his allegiance to his client’s mother, an old family friend, yet begins to question his beliefs when he discovers wounds on the student that point to his extensive torture by the authorities. All of a sudden Song is faced with an intransigent, self-serving legal system that is keen to keep the status quo while endless innocent victims rot in prison.

It might be a little obvious to say that watching films from other countries gives you a different perspective on certain world events, but it often proves to be a fringe benefit of looking outside of Hollywood for entertainment. ‘The Attorney’ gives viewers outside Korea a slight insight into the troubles the nation faced in its modern history; it is primarily a well-made piece of entertainment first and foremost, but that doesn’t negate its skill in showing a different side to South Korea. The traditional dichotomy in the West is that the South were always the good guys fighting the oppressive North, yet ‘The Attorney’ is a reminder that not so very long ago the picture was much murkier.

‘The Attorney’ is a very well presented legal drama that has a massive advantage over its Western contemporaries, namely the historical context it can call on. Yang Woo-Seok blends the dramatic and historical with panache ensuring that the dreadful actions of the military dictatorships of the past aren’t just shoe-horned in to create some lazy polemic, but actually inform the direction of the narrative. The audience feels the hopelessness that the lead protagonist faces when he takes on a twisted legal system – it is that often forgotten skill of putting the viewer in a world completely unlike their own and make them feel every gut-wrenching plot contortion.

Song Kang-Ho’s place as one of modern cinemas most captivating stars is once again assured. From his character’s humble beginnings to his defiance at the end, Song is predictably brilliant and even manages a few comic touches that never descend into awkward farce. A special mention should also be afforded to Siwan from Korean pop group ZE:A – why do Asian pop stars integrate so seamlessly into cinema while Western idols mostly end up like incongruous wooden doorstops?

‘The Attorney’ was a box-office hit in its native territory. Yet it isn’t a noisy blockbuster with shrill bells and whistles; it is a smartly made drama with a dash of redemption, a healthy chunk of political history and a level of tension cranked up to the zenith.