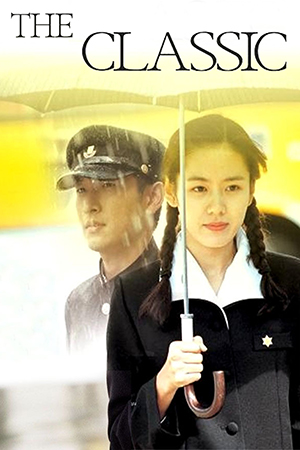 Two years after forever cementing his name in Korean cinematic history with ‘My Sassy Girl’, Kwak Jae-young presented audiences with ‘The Classic’, a film that once again concentrated on themes that the director clearly enjoyed committing to celluloid. This time the surreal humour is nudged aside in favour of a sweeping narrative about a love through the years and how it proves to be mirrored in another time. Yet again though, Kwak spends an opulent two hours plus telling this intense tale.

College student Ji-Hae quietly pines away for handsome intellectual Sang-Min, but has to watch idly as her brash best friend Soo-Kyoung press-gangs him into courtship. Ji-Hae socialises with them regularly and immediately finds that she has an affinity with Sang-Min, yet loyalty to her friend comes first and she hides away in the background. While she busies herself with tidying her flat, Ji-Hae discovers love letters that were written to her mother, Ju-hie, when she was of a similar age and finds that awkward situations have changed little since the 1960s.

The focus switches to the letters and their ghost writer, Jun-ho, who is asked by his gangly best friend Tae-Soo to use his literary skills to woo the beautiful, though seemingly unobtainable Ju-hie. Jun-ho sees why his comrade is so enamoured of her when he sees a picture of the object of Tae-Soo’s affections and finds the words he composes in writing are very much from his own heart. The attraction he feels for Ju-hie is made real when he meets he during a summer holiday in rural Korea and shares a few precious moments with her before her prominent family step in. Their paths cross continually ever after though and Jun-ho has to shut away his feelings as Tae-Soo tries to woo the love of their lives.

‘The Classic’ is another romantic drama populated by beautiful, intelligent and ultimately ingenuous students whose sensitive feelings are as delicate as a Faberge egg. The fact that my own school was more akin to a Ken Loach film (sans kestrel) and the patrons were more interested in whether Nike or Adidas was the current trainer to have came to mind as I saw this contrasting view of youth. Yet the fact that the environment of ‘The Classic’ is a world away from Western teen films is one of the reasons why the very earnest romantic couplings at the heart of the story manage to stay the right side of sentimental. Kwak Jae-young may not written have the book on cinematic manipulations of romantic drama, but he probably adapted the screenplay so adept is he at stirring up the audience’s emotions even during the least promising scenes. The director fashions the environment around his characters, using Korea’s natural beauty and the very weather itself as stages for grand gestures of love. It may sound coldly calculated and cynically premeditated, but the man behind the lens is an artist with the ability to pluck these moments away from saccharine hell rather than a pedestrian film-maker content to sink into it.

‘The Classic’ comes close to being just that, a Korean love story that stitches together a series of captivating moments into a dual narrative that promises to build to an eloquent crescendo. And then the film passes the 100 minute mark. All of a sudden bathos creeps in, replacing well managed sentiment with empty spectacles that ram our affections for the characters down our gullets refusing to allow us up for air – if the false endings that infest this film were Nectar points I could probably buy Venezuela. As with so many films that verge on excellence only to ultimately slump into histrionic drama, it is impossible not to feel cheated by the makers. One of the concluding messages – difficult to explain without spoiling the various twists – also leaves a bitter taste in the mouth as does the final, unnecessary revelation.

In common with the best genre pieces, ‘The Classic’ does at least have a cast of attractive performers to bring the more resonant moments to life. Son Ye-Jin is adorable in her dual role, managing to emphasise the differences in her two characters enough for a division to become apparent. Cho Seung-Wo, peerless in the superb ‘Marathon’, is equally as accomplished as his on-screen partner while a special mention goes to Lee Ki-Woo as the oafish, yet endearing Tae-Soo. Kwak gives this cast some effective scenes to show their abilities in; the powerful moment where Tae-Soo is beaten by his father adds another layer to the character and actor, but unfortunately this intriguing plot strand is carelessly discarded.

Kwak Jae-young has presented us with a film that is difficult to properly judge. It starts quietly, edges towards something quite special and finally nosedives into woeful melodrama. Although ‘The Classic’ boasts qualities in nearly every department, it eventually chases it own tail trying to end the story successful – and here it especially fails.