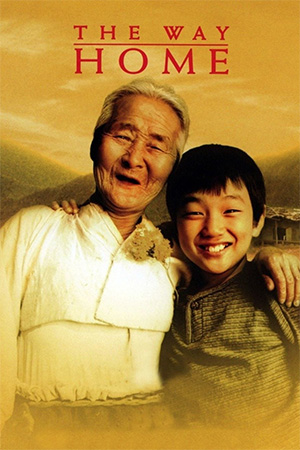 Seven-year-old Sang-Woo (Yoo Seung-Ho) is a city boy placed in an awkward predicament in that, while his mother (Dong Hyo-Hee) searches for work, he is trotted off from Seoul to her tiny, rural hometown village and left in the care of his Grandmother (Kim Eul-Boon). Communication is difficult, as his septuagenarian grandmother is mute, and her rudimentary existence a complete culture-clash to the urban capitalism he is accustomed to. Without a functional television, running water or any of the creature comforts of home, Sang-Woo is quick to vent his frustrations on Grandma once his limited toys and trinkets from the city wear out their welcome.

But Grandma silently endures his protests and tantrums, repeatedly doing the best within her means to make him feel at home. Whilst out and about seeking batteries for his Gameboy, Sang-Woo befriends neighbouring farmer’s son Cheo-Lee (Min Kyung-Hyun), and develops an innocent crush on his friend, Hae-Yeon (Yim Eun-Kyung). As time passes, the initially rebellious tyke comes to respect and admire his elderly Grandma, as well as discover that the love within family knows no bounds.

The second, and last since its release, film from female director Lee Jeong-Hyang of ‘Art Museum by The Zoo’ (1998) fame, ‘The Way Home’ (2002) is not only a further exploration of themes she examined within that film, but also something of a resplendent gem of a film. Again, as with ‘Art Museum’, Lee puts two disparate personalities together and allows her story to grow out of their interaction and how they respond, as well as grow, against each other. Obviously, the major difference herein is that, unlike the love story that grew out of the personality clash between Lee Seong-Jae and Shim Eun-Ha, there is a vast chasm of age difference between the two central leads as well as this being a tale of familial love over the romantic variety. One almost wonders from the outset how much of a story there could possibly be between that of an urbanely-displaced seven-year-old and his mute seventy-eight-year-old grandmother, yet as the story progresses, we find ourselves entrenched and enchanted by the burgeoning journey of understanding that develops between the two. Though the obnoxiousness of Sang-Woo may initially frustrate, realisation dawns quickly that he is little but a child venting immature insecurities against his newfound alien environment.

The most astounding achievement of Lee’s film is within its cast, most notably the elderly Grandma as portrayed by Kim Eul-Boon. Like the majority of cast, aside from Yoo Seung-Ho, Kim was not a professional actor; in fact, prior to ‘The Way Home’ she had not only not acted in any manner, she had never even seen a film nor was aware of the processes of producing one. It may seem almost unbelievable, from a Western perspective, that an individual could possibly see out almost eighty years of life and never have encountered the art-form of motion pictures, but like the remote location of Jeetongma where the film was shot, Kim was as much a found quantity as any of the other genuine villagers who surround her as supporting cast members. Yet her performance is nothing short of breathtaking, as she emotes and conveys brilliantly even the tiniest facets of her role, albeit without uttering a single word. Kim’s performance is touching, tender and deeply intricate in its ornate simplicity; she imbues her character with such a sense of authenticity and realism that, bent with age and walking cane in hand, it is virtually impossible not to feel the deepest of empathies for her elderly matriarch.

Complimenting perfectly Kim, and the understated learning curve of the boisterous Yoo, is the gorgeous shooting location of Jeetongma in the Choongbuk Province, resplendently set amongst mountainous vistas and nestled amidst the lush greens of the farming communities. Akin to little Sang-Woo himself, this aspect of the film may not appeal to urbanites or those of metropolitan persuasion perhaps more than that of idyllic rural cinematic convention, but the locations impress as well as heighten the central thematic of cultural clash. Shorn of all the conventions he is used to, Sang-Woo is somewhat encouraged to emerge from his insular shell and discover that there is much more to his young life than materialistic possessions that only really bring him temporary joy. Be that the friendship of someone of far simpler means than himself in Cheo-Lee or finding innocent delight in the attentions of a newfound female friend like Hae-Yeon, Sang-Woo’s path is one of childhood discovery and adventure. Of course, ultimately, most dear to him of all is the bond of family and familial love that he finds with his grandmother and the growing sense of attachment that the two come to share.

It’s not hard to see why ‘The Way Home’ went on to be the runaway success that is was in home country of South Korea, as it is a truly beautiful tale of personal growth and self-discovery that is more than perfectly in tune with many Asian ideals of family and the implicit importance of such. More important than all the life lessons that Sang-Woo learns during his stay with his grandmother, is the bond that grows between them and the way that narrative arc unfolds. Come the finale, there is a bittersweet poignancy to all that has gone before and the inherent simplicity of Sang-Woo’s final act for his frail grandmother is one that is profoundly moving. And essentially, simplicity is what Lee’s film is all about; both absolving the complexities of daily life into their individual elementary facets and the true undercurrent simplicity of human relationships that we so needlessly complicate instead of just acknowledging the fact. ‘The Way Home’ is both an intimate portrait of personal growth and understanding between two vastly divergent generations, and an extraordinarily touching examination of life from both ends of the journey. It is also an absolute joy to indulge and comes with my highest recommendations.