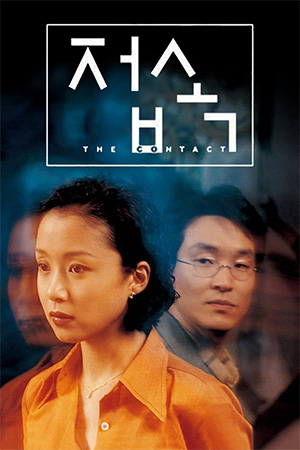 Intended as a very loose Korean adaptation of hit U.S. rom-com ‘You’ve Got Mail’ – itself an adaptation of ‘The Shop Around the Corner – ‘The Contact follows two lonely people who make a chance connection. Tackling the story from a more dramatic point of view though, this is an early example of the pensive style that would reach beyond local borders into the 21st century.

After suffering a break-up with the love of his life, radio producer Dong-Hyan struggles to bring back any happiness into his life. Even the playlist he organises for a late-night radio programme is full of tracks that have sentimental value to him, specifically ‘Velvet Underground’s ‘Pale Blue Eyes’. Listening to the rare play of this track is Su-hyun, a young woman panged by the unrequited love she feels for her closest friend who she had inadvertently matched up with her room-mate. The song sticks in Su-hyun’s mind and she requests the it again, much to the astonishment of Dong-Hyan who suspects his former girlfriend is trying to make contact with him. When he e-mails the person who requested ‘Pale Blue Eyes’, Su-hyun initially pretends to be a friend of this lost love and give hope to the increasingly depressed sender. This one action begins an unusual friendship that helps both of them cope with the emptiness they feel.

Helmed by ‘Tell Me Something’ director Jang Yun-Hyeon, ‘The Contact’ is the kind of drama that would be one of his country’s widest exports ever since. Yet as this film won the prestigious ‘Golden Bell Award’ for the Best Korean Film of 1997, the implication is that this might be near the very top of the genre. While it has its stirring moments and graceful introspection though, ‘The Contact’ isn’t quiet the masterpiece it should have been. Performances are consistently good, with Jeon Do-Yeon particularly touching as Su-hyun and Han Seok-Gyu polishing the tortured protagonist role – to the point that Dong-Hyan lurches into self-pity – that would lead to the seminal ‘Christmas In August’ the following year. Something is still missing however.

Perhaps the undoing of so much promise in the narrative is when the pathos is dragged out until it becomes needlessly maudlin. ‘The Contact’ is one of the first Korean dramas to get given a two hour running time when the execution clearly never needs it and much of the delicate charm dissipates as a result. Gradually the scenes of the understated and the poignant repeat themselves with the advancement of the plot being moved aside in favour of emotional manipulation. Not that there isn’t genuine reason for the heart-strings to be earnestly tugged, but a less is more approach would have benefited the story’s slackened moments.

‘The Contact’ is an interesting foundation for a style of film-making that would be refined and exploited in equal measure throughout the next decade. Despite not getting the rhythm completely correct throughout, it still reminds the viewer that Korea has an understanding of the quiet desperation of loneliness that has rarely been achieved in the West. It may take a wasteful portion of two hours to do this, but its certainly not a waste as a whole.