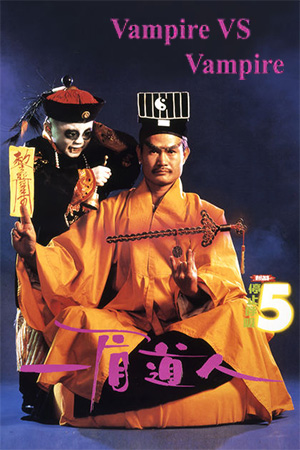 By the time this addition to the comedy horror genre came along, Lam Ching Ying was so typecast in the role that we all knew exactly what to expect before we watched it. The main difference here is that Lam himself directs the feature, and it is interesting to see his take on the ‘Mr. Vampire’ series he became so synonymous with.

As ever, Lam is a Taoist priest with a couple of wayward students providing a little comedy relief, and the story follows the usual predictable pattern of their simple lives being disrupted when an evil Vampire, Ghoul, Zombie (insert your own creature here) arrives to cause havoc. In this case, it is the novelty value of a Western style Dracula being released to unleash the kind of nightly terror they hadn’t experienced before!

Although its title does not begin with ‘Mr. Vampire’, it may as well do, and is certainly one of the better sequels to the unsurpassed original. The addition of a different villain to the usual HK supernatural film is refreshing as it opens up new avenues for both the comedy and action. Speaking of action, this is predominantly handled by Stephen Tung, and well executed by the underrated Chin Siu Ho. There are plenty of set pieces and small amounts of good choreography on offer, but as with the rest of the series it could not really be classed as a kung fu flick. Nevertheless the knocks and falls are of the usual 80’s HK standard and I personally never grow tired of watching them.

As you can probably tell by my previous comedy horror reviews, I love the genre and this is easily one of the better examples. The peripheral cast all read like a who’s who of HK cinema, and it does not pretend to do anything other than offer 90 minutes of lightweight entertainment. Definitely recommended.