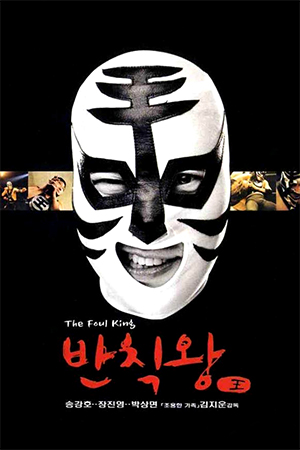 Emerging from the shadows of cinematic neighbours Japan and Hong Kong, Korea’s film industry is currently enjoying a bask in the limelight with a series of very successful works. Well produced hits such as ‘Shiri’ and more recently ‘Joint Security Area’ have ensured that the world has started to take notice of Korean cinema – even to the point of suggested Hollywood remakes of the biggest hits. Although I count myself primarily as a Hong Kong film fan, I decided to try a recent offering from one of Asia’s hottest markets. Therefore the hugely successful ‘The Foul King’ was to be one of my first dabblings.

‘The Foul King’ tells the story of indifferent and fairly dim-witted financial advisor Dae Ho. At odds with the pressured environment and the general aggression of his regimented work, Dae Ho floats through his day with little consequence. His bullying ogre of a boss adds to his woes by applying a formidable headlock to his Im when he’s late for work – something of a regular routine. Unable to escape this lock and after happening upon a local wrestling school, Dae Ho dedicates himself to physical training and asks to join the regime. First impressions are not good though and the gangly, awkward figure of the newcomer means that he is unceremoniously thrown out. It is only when a wealthy promoter offers the teacher a considerable sum to create a new villainous wrestler that Dae Ho is called back and given the chance to make his mark. Thus, the ‘Foul King’ is born and his training then sees him learn all of the dirty tricks and sneaky moves of the sport. Now lined up to provide the Korean people’s favourite wrestler with a despicable figure to hate, Foul King prepares for his unique shot at fame. The effects of this radical change in his private life also makes him a more assertive figure at work and allows him to face the numerous challenges of his life that he’d previously hidden from.

Despite any criticisms that follow in this review, the first thing that should be known about ‘The Foul King’ is that it is excellent entertainment. It’s far from perfect, but it is  infused with an infectious sense of humour and an abundant supply of incident. In fact, ‘The Foul King’ is dominated by such an engrossing air that it’s easy to forget how much better it could have been. Although shaping itself to be a film with a probing look into Korean society, the truth is that it never fully uses any of its sub-plots. There’s an initial look at the pressures and corruption of Im’s workplace, the toll it takes on one of his workmates, but this is annoyingly wasted. Thrown away with it is a woefully underdeveloped take on unrequited love and a few character histories that would have provided the narrative with a bit more bite. Therefore this is a classic example of a glossy surface that, when scratched, reveals very little underneath though it would like to think otherwise.

‘The Foul King’ benefits from a nicely understated lead performance and a winning blend of supporting players. When it focuses on its strengths, the film manages to hit some notable heights and remains worthy of praise. Despite its obvious shortcomings, ‘The Foul King’ is an excellent advert for Korean cinema and retains a strong entertainment value even during its weaker moments.